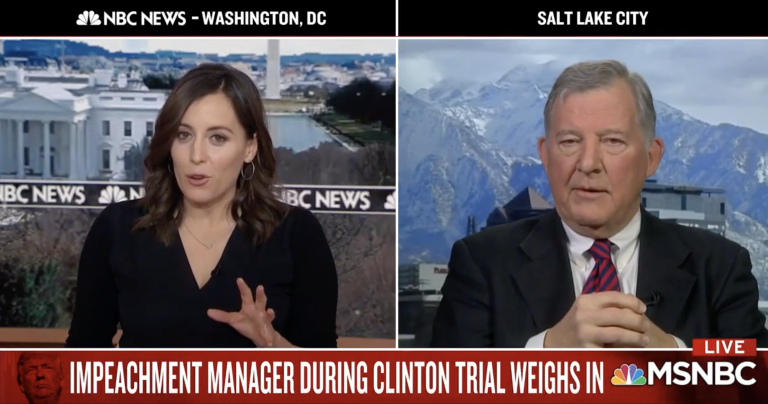 MSNBC anchor Hallie Jackson cut off a Republican guest Monday after he said President Donald Trump didn’t do anything wrong in his handling of lethal aid to Ukraine.

Jackson ended an interview segment with former representative Chris Cannon when Cannon asked which facts contradicted his argument that Trump had done nothing unusual in his handling of the aid.

Jackson had said to Cannon, “I think the facts, congressman, maybe belie what your argument is here, when you look at some of the objective facts that not even the White House disputes at this point.”

“What are those facts?” Cannon asked, but Jackson ended the segment without any further discussion on the matter.

Earlier in the interview, Jackson had asked Cannon whether it was appropriate for one of Trump’s attorneys, Alan Dershowitz, to say he is not sure whether his client “abused power,” a charge leveled against Trump in House Democrats’ articles of impeachment.

“Would you be comfortable with that?” Jackson asked about Dershowitz’s position.

“Absolutely,” Cannon said, arguing Trump hasn’t done anything out of the ordinary for presidents negotiating with foreign countries. “That’s not the basis for impeachment.”

Jackson said she appreciated the congressman’s insight because of his role as an impeachment manager during the trial of President Bill Clinton.