Elon Musk appears before the media in Carson City in September 2014 after the state approved tax breaks and other benefits accompanying the company’s plan to build a batter factory in Nevada. (Photo by Max Whittaker/Getty Images)

Tesla’s expansion of its Nevada factory appears poised to trigger an entirely new package of tax abatements worth hundreds of millions of dollars, all of it authorized by the original sweetheart deal Legislators approved in 2014.

Tesla last week announced a $3.6 billion, 4-million-square-foot expansion of its Giga Nevada campus in Northern Nevada. The project, which will include a battery cell factory and a high-volume semi-truck factory, is projected to bring an additional 3,000 new jobs to the Reno-Sparks area, according to an announcement on the company’s website.

The announcement was teased by Governor Joe Lombardo during last week’s state of the state and officially announced in a private event one day later. Neither came with mentions of additional public assistance, but it is expected that the electric car company will pursue additional tax abatements beyond the estimated $1.3 billion in tax abatements and other financial incentives it secured nearly a decade ago during a 2014 special session.

These new abatements — on sales, property and modified business taxes — are likely to total hundreds of millions of dollars. Securing them will require no approval from Nevada legislators, instead going directly through the Governor’s Office of Economic Development which would follow abatement provisions outlined in the bill that established the original Tesla deal.

In that 2014 deal, which passed the Legislature unanimously and was signed by then-Governor Brian Sandoval, Tesla received:

Tesla also received an unprecedented $195 million in transferable tax credits, $8 million in electricity rate discounts, and a promise from the state to spend upwards of $45 million in roadway infrastructure needed by the Tahoe Reno Industrial Complex where the factory would be built. Those were essentially one-time provisions.

But the lengthy tax abatements were written into Nevada Revised Statute, essentially creating an entitlement that applies to any qualified project that makes $3.5 billion in investments over 10 years — not just the specific gigafactory project pitched by Tesla in 2014.

No company has qualified for the abatements since then.

But Tesla’s new project on its surface would appear to qualify.

If the value of new abatements is comparable to those for the existing factory, they could total hundreds of millions of dollars over a decade, effectively constituting the third largest assistance package in Nevada’s history, after the initial $1.3 billion for Tesla and the $750 million in public financing for what would become Allegiant stadium.

Tesla and GOED are required to compile an annual report detailing their capital investments and tax abatements. According to the most recent report, which came out in October, Tesla has benefitted from $410.7 million in tax abatements since 2014.

In the most recent fiscal year alone, Tesla received $65.7 million in tax abatements — $38 million in property taxes, $14.6 million in payroll tax and $12.8 million in sales tax.

The company is scheduled to begin paying real and personal property tax and modified business tax in June 2024. They will enjoy another 11 years of sales tax abatements.

GOED spokesperson Gregory Bortolin confirmed that Tesla has not yet applied for any new abatements, but said if they do it would be processed as an entirely new project rather than an expansion of the existing deal they have.

He said this means Tesla should begin paying property and payroll taxes related to their original battery factory once the original timeline expires, and new abatements should apply only to the two new factories announced last week.

Bortolin said the GOED process is highly structured with a rigorous auditing process and clawback provisions for any company that falls short of their promised investments.

“We don’t write checks,” he added. “We don’t negotiate with companies. It’s very black and white. It’s all based on (Nevada Revised Statute).”

Notably, the Nevada State Legislature is set to convene next week for its biennial 120-day session. There, negotiations can — and often do — happen.

It is quite common for companies reaching the end of their public subsidy deals to renegotiate with states, says Greg LeRoy, executive director of Good Jobs First, a watchdog group that tracks public subsidies across the country. But that doesn’t mean states should acquiesce to company demands.

Tesla in 2014 was “far from a sure thing,” LeRoy points out. The company had only started mass producing cars two years earlier. CEO Elon Musk was already a billionaire, but his estimated net worth of $8.4 billion ranked him the 158th richest person in the world, according to Forbes. It wasn’t yet widely understood just how dependent on government subsidies his various companies were.

Nevada had assumed some risk in hopes of building the regional economy. The state economy was still reeling from the Great Recession. While some questioned why Nevada had to offer an incentive package that was more than double that Musk himself had said Tesla would need, the consensus among lawmakers was that the unprecedented megadeal would kick start something major.

Today Tesla is considered the most valuable car company in the world and is setting record profits. Musk has climbed all the way to the top of the billionaire list, amassed a net worth of $181.3 billion, and evolved from generic tech bro with a libertarian streak to a social media-owning provocateur unapologetic in his dabbles with conspiracy political theories.

And Nevada’s economy, while still not as diverse as most would like, is flush.

“After you’ve primed a pump and the pump is gushing, you don’t keep priming the pump,” says LeRoy of economic development.

The asserted intention of incentives offered by state and local governments is to woo a new company, or keep an existing company from picking up stakes and moving elsewhere, neither of which applies to Tesla’s expansion. LeRoy says Nevada lawmakers should keep that in mind.

“You awarded a risk taker and now you should expect that company to act like everybody else,” he said. “Build on that original investment, but say we are not going to treat you like a new industry and a new risk taker and a moonshot bet on the Reno area economy because you’re not anymore.”

There has been some appetite in recent years for rethinking Nevada’s approach to tax incentives as a driver of economic development.

‘Nevada is ready to partner’

Independent audits have found that companies — Tesla included — have failed to fully deliver on the promises they made to secure tax abatements.

In 2019, state lawmakers passed a bill to create a legislative committee focused explicitly on evaluating tax incentives across the state. Then-Assemblywoman Dina Neal (D-Clark), who at the time chaired the Assembly Committee on Taxation and presented the bill during its legislative hearings, argued that the committee would have gone beyond the compliance-focused auditing and review conducted by entities like GOED.

Then-Governor Steve Sisolak vetoed the bill, saying it was redundant.

Neal, now a state senator and chair of the Senate Revenue and Economic Development Committee, could not be reached for comment.

Also in 2019, then-Assemblywoman Teresa Benitez-Thompson (D-Reno) pushed through the Legislature a bill to prohibit GOED from awarding abatement packages to companies that had already received them. But that bill only applies to ‘general economic developments’ and not to projects above the $3.5 billion threshold of promised investment.

The bill also prohibited abatements on the local schools support tax — the portion of the state sales tax that funds K-12 education. That provision will apply to any future megadeals.

GOED pushed back but ultimately the bill received bipartisan support in the Legislature and was signed by Sisolak.

Benitez-Thompson, who termed out last year, is now the chief of staff for Attorney General Aaron Ford.

Governor Joe Lombardo, who succeeded Sisolak this year, has framed himself as a pro-business politician. He has pledged that he will not raise taxes but has spoken positively about the use of tax abatements and other financial incentives. 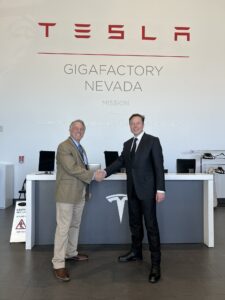 “Economic development matters,” he said during his recent state of the state, immediately after teasing Tesla’s $3.6 billion announcement. “I’m proud to declare that Nevada is back open for business, effective immediately.”

When asked by the Current if Lombardo expects Tesla to apply for additional tax abatements through GOED, Communications Director Elizabeth Ray replied that she “can’t speak to that at the moment.”

The day after his state of the state speech, Lombardo attended the new Tesla project’s official announcement. It was a private event at the Giga Nevada hosted by Elon Musk.

At that event, a recording of which was made public by Tesla, Musk said the $3.6 billion figure is an estimate and that he expects the true investment to be “over $4 billion.” He added that he expects Tesla to over-deliver on their promise to create 3,000 new jobs.

Musk’s comments emphasized a long-term vision. He noted that Tesla currently has 32,000 acres of land, “of which we’ve still only used a small portion” and described the new facilities as “just phase two.”

Musk introduced Lombardo, who brought on stage with him Tom Burns, his newly appointed director of GOED.

Lombardo introduced Burns as the man who will be “instrumental in partnering with Tesla to ensure that we get this project off the ground and built and ensure it goes in perpetuity into the future.”

Also brought on stage were former Governor Brian Sandoval, now the president of the University of Nevada Reno, and Tracy Larkin-Thomason, the new director of the Department of Transportation.

Lombardo told the crowd of Tesla employees that Larkin-Thomason’s “number one priority” would be to expand I-80 to help employees commute and ensure that the Tesla Semis could get on the road.

The post As Tesla factory expands, so too could Nevada’s massive tax abatements appeared first on Nevada Current.

Click this link for the original source of this article.
Author: April Corbin Girnus

This content is courtesy of, and owned and copyrighted by, https://www.nevadacurrent.com and its author. This content is made available by use of the public RSS feed offered by the host site and is used for educational purposes only. If you are the author or represent the host site and would like this content removed now and in the future, please contact USSANews.com using the email address in the Contact page found in the website menu.

...
Miners in Siberia dug up a strange statue of an angel with shield and sword in the permaf...
White House denies Biden offered Putin ‘20% of Ukraine’
UK publisher ‘refuses royalties’ to Russian photographer
Unfit for Liberty
Pelosi Bodycam Footage Revealed, and Pfizer Exec Caught on Tape, with Michael Knowles and...
Nikki Haley To Take On Trump, Will Announce She’s Running For President On Feb 15
You Might Like...