Twitter has again banned Nick Fuentes and Ali Alexander, both associates of Ye, the artist formerly known as Kanye West.

Alexander and Fuentes, associates of Ye involved with his potential political campaign, were both banned from Twitter in 2021. In December of last year, while Ye was on the Alex Jones show, the he and Fuentes both used his account to tweet out messages.

On January 9th, Alexander saw his Twitter account restored, as part of the mass amnesty for conservatives who had been banned by Twitter’s previous regime, while Fuentes was unsuspended on the 24th, and claimed to have gained around 25,000 followers since he got back on the site.

However, on Wednesday, both Alexander and Fuentes were permanently banned again from Twitter. In a post to Telegram, Alexander said that he had, “again, violated no rules,” arguing that it must have been a “manually triggered suspension by some employee”:

“They’re afraid of Ye. I’ve violated no policies, got no email, never done a Twitter Space, only called for Love & aggressive Peace. They’re afraid of me organizing so rogue employees and mass reporters are doing the mostest. I rebuke them in the name of Jesus Christ. Give me my account back, now!”

Fuentes remarked it was “fun while it lasted,” having hosted a Twitter Space on Tuesday evening.

Alexander later confirmed that his tweet featuring lyrics from the Ye song “Burn Everything,” was being taken out of context and “used by a rogue Twitter staffer to justify a no-notification perma ban.” He clarified that he was not advocating “for actually burning human beings,” and noted that “metaphors and quoting rap songs aren’t policy violations.”

At the time of writing, while Alexander has seemingly confirmed the reason for his ban, Fuentes has not clearly identified the cause of his suspension, or whether Twitter supplied such a reason.

Prior to his ban, Fuentes posted content featuring Ye and the number “24,” leading some to speculate Musk’s platform may have penalized both men for their association with Ye. 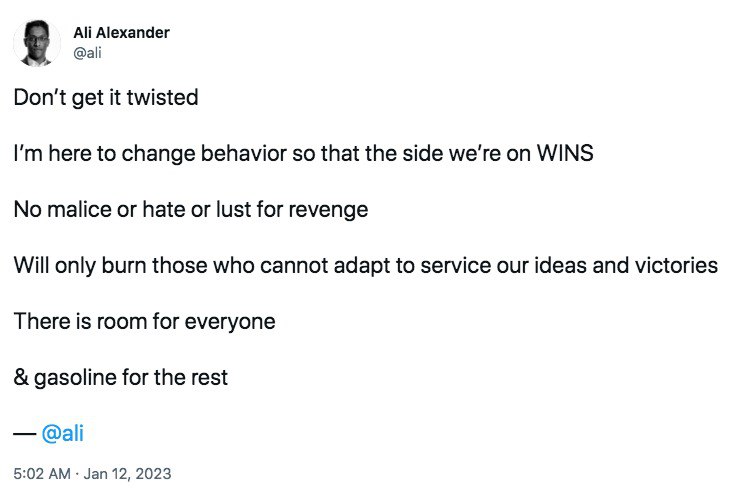 Last year, Musk welcomed Ye back to Twitter following a ban from the platform. The artist then posted a Unidentified Flying Object (UFO) cult image that includes a swastika – a noted hate symbol – merged with the Jewish Star of David, and was became one of the first high profile Twitter suspensions under Musk’s ownership.

Ye later posted screen shots of his conversation with Musk to Truth Social. Shortly after Ye posted the image, Musk apparently texted him “Sorry, but you have gone too far. This is not love.” Ye shot back, asking Musk who “made [him] the judge,” according to the screenshots.

“I tried my best,” Musk then wrote on Twitter, Valiant News reported at the time. “Despite that, he again violated our rule against incitement to violence. Account will be suspended.”

As the reason for the bans remain speculative – and perhaps questionable – a number of conservative Twitter users are calling for a reversal.

Why are @Ali and @NickJFuentes banned again @elonmusk? pic.twitter.com/4E1kkhLjrX

Doesn’t matter how offensive people may find Nick Fuentes’ speech to be.

Free speech is free speech. You’re either pro free speech, or you’re against it. There’s no in between because there’s no such thing as hate speech.

Alexander is the founder of the Stop the Steal movement, which led a series of well-attended protests and marches after the 2020 election, including on January 6, 2021. He was banned from Twitter due to questionable claims that his tweets or remarks at those events inspired the unauthorized protests at the U.S. Capitol on January 6.

Fuentes, who was also involved in the Stop the Steal movement and spoke to a crowd near the U.S. Capitol on January 6,  is a controversial podcast host who Axios once accused of representing “the rise of white nationalist Hispanics” and being a far right “provocateur.”