Militant leftists far outnumbered people protesting a drag story time event for kids Saturday in front of the Fall River Public Library in Massachusetts — and a drag queen was on hand to rally the woke troops.

Miss Gloria was jazzed that so many fellow leftists came out “to show Nazis that they have no place in the 21st century!” The cheering crowd loved it.

Speaking in defense of the drag story time event, Miss Gloria added: “This is not lewd! We LGBT people, we’re not inappropriate! … We reject hate!”

Video journalist Brendan Gutenschwager captured the drag queen’s speech and a number of other notable moments:

u201cDrag performer Ms. Gloria addresses the crowd and thanks them for supporting the event, which has faced protests in recent months here in Fall Riveru201d

WJAR-TV spoke to Sean Connell — who plays Miss Gloria — and he told the station he believes there’s a big difference between drag shows that take place at bars and the drag story time event.

“It’s not recruitment. It’s not grooming. It’s love. It’s stories,” Connell told WJAR. “It’s letting LGBT kids know that LGBT adults are here — we survive [and] they can survive and they can continue to be themselves.”

Connell added to the station that despite the protests, the drag story time at the library will continue every month: “I think that the big message here is, ‘Don’t let hate and fear stop you from learning who you are and from being your authentic self.'”

At one point, a lone man holding a “no sex with children! Pervert!” sign stood in front of the leftist group supporting the drag event, one of whom waved an Antifa flag: 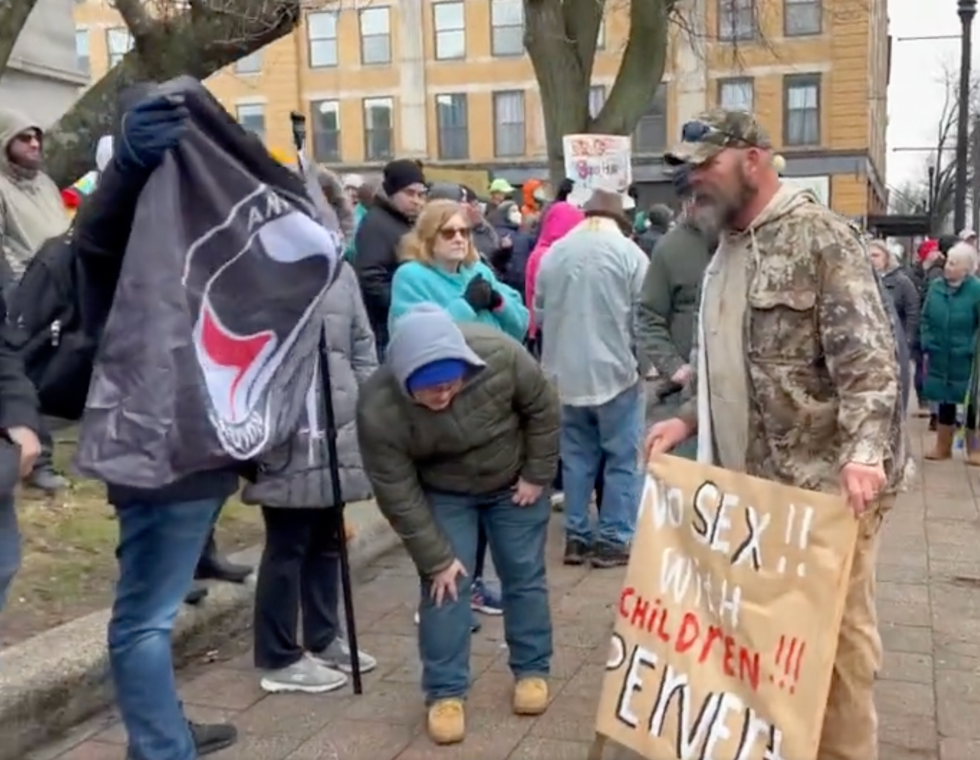 Here’s the clip showing the man eventually being surrounded:

u201cA protester against the drag story time event is confronted by event supporters outside the library. A couple other protesters then cross the street towards the library as wellu201d

There was your obligatory “go home, Nazis!” chant:

u201cu201cGo home Nazis!u201d chants from supporters of the drag story time event after the arrival of a few protesters outside the Fall River Public Libraryu201d

A different lone man standing against the drag time story event faced off against leftists standing guard and wouldn’t back down when one them took a couple of steps beyond the protection of his group and put on a tough-guy routine: u201cu201cTheyu2019re protecting you right now, theyu2019re not protecting usu201d An event supporter says of the police, who are watching the exchange close byu201d

WJAR did get the perspective of one person protesting the drag time story event.

“I’m just completely against it, I want it to stop,” Christine Doherty told the station. “Drag shows and drag queens are not appropriate for children. Nobody’s homophobic on our side at all. Drag shows are fine for adults who want to go see them.”

...
Garland Hiding 400 Pages of Evidence
World Economic Forum Brings Us Closer to 1984 – Wrapping It All Up For You In A Montage
Russian-British comedian dishes on why his woke-bashing rant resonated with millions: ‘Ad...
Large yachts of the super-rich spared from EU’s new CO2 tax
How America’s Elites want you to “Eat the Bugs”
That’s Science? Congress Must Probe the Rationale for Covid Mask Mandates
You Might Like...