This week, Your News to Know rounds up the latest top stories involving gold and the overall economy. Stories include: Reviewing gold’s big week, the folly of Canada’s central bank, and a portfolio manager’s outlook on what lies ahead.

Gold’s $100+ rise to $1,760 from $1,650 last week wasn’t an intraday price move, but it feels so abrupt and rapid. And every time gold’s price surges like this, we expect there to be some crisis or calamity. After all, it was gold’s biggest weekly gain in 30 months.

Remember what happened 30 months ago?

This time, though, there’s just no obvious crisis or calamity on the horizon… Should we consider this a newly-bullish development? That gold can gain so much (and so quickly) in the total absence of alarm bells?

The latest U.S. inflation data clocked in at 7.7% , which is, as the Bureau of Labor Statistics (BLS) wants you to know, “the smallest 12-month increase since the period ending January 2022.” So far this year, inflation has declined from over 4x the Fed’s target to almost 4x the Fed’s target. I guess you can call it progress…

Depending on where you live, inflation remains alarmingly high, over 12% in some regions while other areas celebrate a pullback to merely 6.6%. That matters, because high inflation (and high inflation expectations) have often fueled gold demand.

Mainstream media are full of stories about, “Why is gold posting massive gains on news of slowing inflation?”

There are two ways to look at this…

The first? Inflation is still orders of magnitude too high, and not declining appreciably. (Should CPI continue to come in 0.2% lower every month, we’re still looking at over two and a half years of prices rising faster than the Fed’s targeted rate.) Folks are finally catching on, and not just retail investors – as we discussed last week, central banks are buying gold at a 55-year record pace. Maybe even the slowest learners are starting to understand that their dollars are going to keep losing value faster than expected for significantly longer than anyone has been willing to admit?

The second? Well, any drop in headline inflation gets Wall Street hoping for some kind of Federal Reserve policy turnaround. The much-discussed “Fed pivot.” Perhaps we’ll see stimulus, another few trillion dollars of money-printing and another round of quantitative easing to ease our pain? That’s what we’ve come to expect, given that food and energy prices have yet to decline.

That’s right – I said, food and energy prices have yet to decline. But inflation went down? How does that make sense?

Well, according to the BLS, exactly four price categories declined in October: 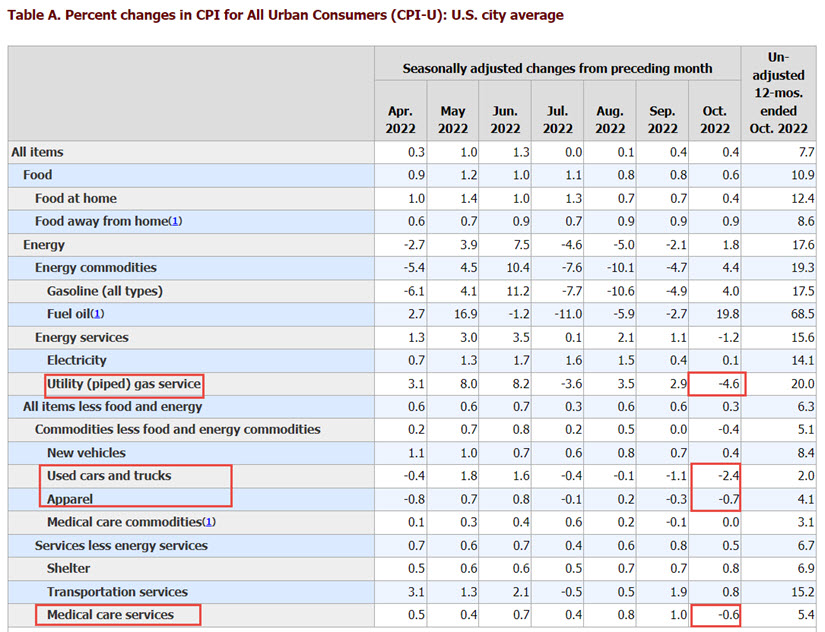 Chart and data via U.S. Bureau of Labor Statistics

In other words, all this hoopla about Inflation’s finally declining! is rather misguided. (Unless you’re shopping for a new wardrobe or an old sedan.)

But the real story is much simpler: gold price rises in direct correlation with a weakening dollar. See for yourself:

When the green line (USD) goes down, the gold line goes up. Source

This is just a 30-day chart, but it gives you an idea of just how silly it is to talk about gold price without also considering the U.S. dollar’s purchasing power.

In the long run, I expect the purchasing power of the dollar to continue to decline, and gold’s price in dollars to rise. In the short run, we’ll continue to see big price swings whenever Wall Street decides they can forecast the future.

Numismatists might argue, but the Canadian maple leaf is probably the main competitor of the American eagle. The Royal Canadian Mint doesn’t exactly try to hide this desire. And since the U.S. has the largest central bank bullion stockpile on record by a wide margin, Canada cannot be trailing too far behind… Right?

Always the forward thinker, these days Canada finds itself as close to the only nation without gold reserves. The Bank of Canada (BoC) sold its bullion hoard in the early 2000s at bargain prices, surprising everyone who understands sound money.

The official reason, according to former BoC governor David Dodge, had to do with storage costs and bond yields. Dodge elaborated on this back in May, when it was quite clear that any storage costs of holding gold are negligible compared to the risks associated with investing in government bonds (whose market is already years into a crisis). Along with the bond market going under, gold’s price has climbed sixfold during that timeframe.

It’s a good thing for central bankers they get their paychecks regardless of their investment performance.

A more unofficial reason for this shocking about-face, presented by analyst Martin Murenbeeld, is that Canada has no issue viewing itself as a satellite to the U.S. Or, more accurately, it had none back then. The BoC has a swap agreement with the Federal Reserve, meaning that it can just ask the Federal Reserve for liquidity if it’s needed.

We assume no sound money Canadian is happy with this answer, and less so in recent times. These days, nations around the world are making it clear that hoarding gold bullion is the thing to do, and not just because it’s such a safe haven. Serious doubts have been placed on whether the Federal Reserve actually has access to its own gold, or did it lease the bullion out (to save money on storage costs?)

Murenbeeld finds it a likely scenario that the U.S. might need to provide some gold backing to the U.S. dollar down the line to keep it afloat. It’s certainly a gold bug’s best-case scenario. But even if this doesn’t happen, it feels unlikelier that a country would want to part with its gold with each passing day. As BRICS collude to form a gold-backed alternative to the dollar, one that was made possible by dedicated gold hoarding, Canada might find itself regretting its decision even more.

Michael Pento, a seasoned portfolio manager, spoke to Wealthion about the state of the markets and how the Federal Reserve continues to dictate it. The best case scenario? The Fed turns course right now, but we still experience some degree of a recession because the wheels are already turning. If that’s the best case scenario, and certainly given how unlikely it is, we’re curious to hear what the less-palatable ones are.

Pento says stocks, which are often mentioned as gold’s biggest competitor, have to fall by another 30%-60% unless there is a true policy shift. As Pento explains, the stock market’s problems can only be abated either by lower inflation or a re-introduction of quantitative easing. The issue is that one doesn’t go with the other: quantitative tightening is the only way the Fed knows how to bring inflation down, and it appears to be sticking to it.

According to Fed Chair Jerome Powell’s statements, along with a massive reduction in its balance sheet, the central bank wants to reach and then stick to a static interest rate of 5%. It’s a pretty far cry from the 13% of the 1970s, but it’s still something. If that happens, Pento feels that the still-overvalued stocks have to implode and bring general economic conditions down with them.

Pento doesn’t expect any kind of significant Fed policy turnaround until H2 2023, though he says hawkish rhetoric could persist much longer. When the turnaround does happen, it will come in the aftermath of a downturn that will affect all assets. One does imagine gold will be left out of this havoc, to say the least. Pento and the host get into several other things of note, including:

It’s a thought-provoking interview, and I strongly recommend watching the whole thing.

After 8 long years of ultra-loose monetary policy from the Federal Reserve, it’s no secret that inflation is primed to soar. If your IRA or 401(k) is exposed to this threat, it’s critical to act now! That’s why thousands of Americans are moving their retirement into a Gold IRA. Learn how you can too with a free info kit on gold from Birch Gold Group. It reveals the little-known Crooked IRS Tax Law to move your IRA or 401(k) into gold. Click here to get your free Info Kit on Gold.

...
Chart of the Day: Did Gen Z Voter Demographics Quench the 2022 Midterm Red Wave?
FRENCH MEDIA GROOMING CHILDREN TO BELIEVE THE UNVACCINATED SHOULD BE PUT IN JAIL.
Photographer Hired For Balenciaga ‘Kiddie BDSM’ Shoot Says He’s Being Made a Scapegoat
Bill Maher admits ‘there is a rot’ on college campuses, and it ‘comes from academia’
Giant fireball erupts after huge explosion on St Petersburg gas pipeline
NO-GO ZONES right here in the UNITED STATES: did you now call it 'AmericaSTAN'? Say it ai...
US, Canada seek to advance NORAD missile-warning system upgrade
5 OR sheriffs say they won’t enforce new gun control law
This Foreign Company Wants To Mine Massive Amounts of Lithium in Nevada. First, It Must O...
Russia Advances in Marinka, Vuhledar, Ukraine Struggles in Kherson; Europe Braces for Ref...
Responsible Freedom Vs Globalist Techno-Feudalism, Part 1
G20 leaders agree to work toward mandatory digital health passports for all human beings ...
You Might Like...