Arabic
Home ► Politics ► He Was Sick And Tired Of Seeing Homeless People Around His Store, What He Did About It Is Absolutely…

Arabic
Home ► Politics ► He Was Sick And Tired Of Seeing Homeless People Around His Store, What He Did About It Is Absolutely…

A store owner is hoping to spark a movement by posting a simple sign in the window of his store. Things were going to be different in his store, and some things simply would not be tolerated. So leaving onlookers stunned by his blunt words.

And he hadn’t realized that the simple sign on the door of his gas station would turn into a media frenzy.

This new experience totally blew the shop owner away. Star Mar owner Frank Hemani has seen a lot of things living in this small town. He learned to deal with certain situations as they came along. He was also a hard worker, and it paid off after he became the owner of a bunch of gas stations. But it hasn’t always been easy. It was actually pretty tough, especially living in Texas. And mainly for someone with his ethnic background.

So, a movement was started and all it took to make a difference was a bottle of water and a sandwich, which he began offering at no charge at his gas station for those in need. “If you don’t have money or a job, you can have a sandwich and a bottle of water for free,” one sign on a refrigerator case reads.

Frank has also posted a sign in his gas station that says, “If they are hungry enough, I will feed them. If they have children, or child, I’ll definitely give them something to eat.”

Frank says it’s not much, but it’s the least he can do to help. “It’s just a couple of bucks, but somebody will not go to sleep hungry,” he said. 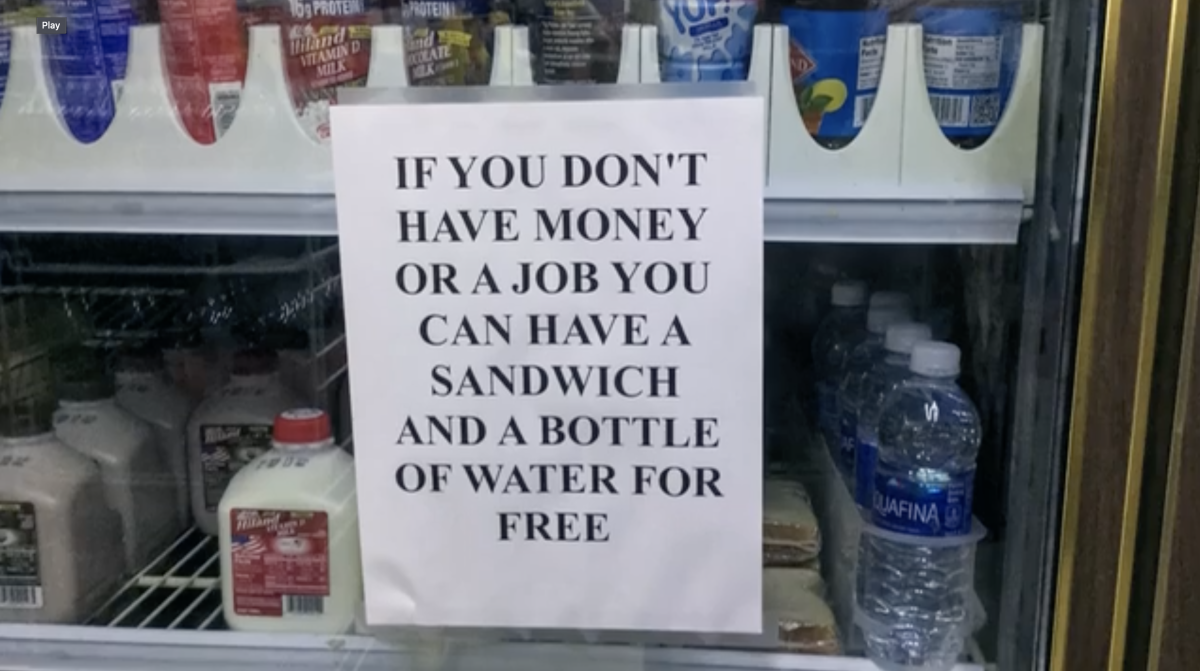 And, those aren’t just empty promises. In fact, Frank once made a mom and her kids a pizza after the woman drove up to his store with her two hungry, crying children in the back seat. She didn’t have money to buy food for her kids, so Frank fed them for free, according to Myrtle Beach Online.

Frank recently saw a woman with two kids in the backseat drive to the store. The kids were hungry and crying, but the woman had no money to buy food for the children.

Frank made them a pizza, and said of his kindness: “I have been blessed. I have never had to struggle.”

He stated that he got the idea when he watched a YouTube video in which a grocery store was making a similar offer. When he looked into it further, he found that “there are a lot of people out there that will help other people.”

He started paying it forward, and the sign has been up for about two months.

Frank stated that he has lived in the community for 10 years and “pretty much everybody knows everybody.”

He is the owner of three businesses in the area, including Minnow Bucket Marina near Quitman.

Click this link for the original source of this article.
Author: dan

...
Babylon Bee is back on Twitter – libs in meltdown
Former Trump AG Exposes the Truth–the Left Does Not Want You to See This
NOTICE: DML Asks You To Support His Son
The 12 Senate Republicans Who Defected to the Left and Just Voted in Favor the Gay plan
Democrat Congressman Goes Missing
Three Things Republicans MUST Do Now
Crackhead Hunter Biden Laptop AUTHENTICATED – Media Pretends They Didn’t Lie About It
Woman Who Was Supposed To Be ‘Disinformation Czar’ Now Registered As A Foreign Agent
Video: Biden’s Taliban now has nearly $7.1 billion worth of US artillery, assault weapons...
Today’s Must Watch: If Faces Could Speak A Thousand Words…
Transgender Woman Wins "Miss America" Pageant.. And People Are Mad
Miles to Go Before You Sleep
You Might Like...