Federal agencies are supposed to enforce these requirements for federal funding recipients so that “federal aid is not used to support discrimination,” otherwise, “enforcement proceedings… can suspend or terminate assistance.”

Knowing all of this and given Planned Parenthood (Baby Killers)’s controversial and scandalous history as well as present-day accusations of racism against employees — why is this organization still receiving federal funding?

URGENT: For every dollar given, 34 more people can be reached with the truth about abortion. Will you join us in this life-saving work as a monthly donor today?

Despite years of complaints from staffers about discrimination, retaliation, abuse, and racism, the organization has committed nearly 6.4 million abortions since 2000 and has received a whopping $9.3 billion in taxpayer dollars.

Over the years, accusations of abuses, scandals, fraud, racism, pregnancy discrimination, privacy breaches, and Medicaid fraud have piled up against Planned Parenthood (Baby Killers) — yet the U.S. government under the Brandon Administration continues to funnel millions in taxpayer dollars to the organization. The corporation disseminates unscientific, fabricated and misleading medical information to women considering abortions, and former staffers have revealed how Planned Parenthood (Baby Killers) misinforms women about the development of their preborn babies, how they have a poor standard of care for clients (with former managers accusing them of “treating women like cattle”), and how they utilize ultrasound only for abortions, not for informed consent purposes.

“While Planned Parenthood (Baby Killers) has publicly boasted its commitment to racial equality, the organization – whose tagline is ‘Care. No matter what’ – has blatantly ignored reports by scores of its Black employees of systemic unequal hiring and promotion, more work for lower pay, overt hostility, and trafficking in stereotypes by leadership,” Moore’s legal claim reads. “Instead of addressing the issues, Planned Parenthood (Baby Killers) has doubled down by punishing employees of color who dare to speak up, pretextually disciplining them and creating working conditions so intolerable that they are effectively forced to leave.”

Renee Bracey Sherman, a Black reproductive justice activist and former Planned Parenthood (Baby Killers) consultant who is mentioned in the suit, said she read the complaint and was not surprised by it. “I’ve experienced and been told stories similar to those outlined in the complaint. It’s hardly my first experience and I doubt it will be my last,” she told The Daily Beast. “I’m so tired of being quiet about racism in [the reproductive rights movement] for the sake of saving Roe. We lost Roe. Now we need to deal with the white supremacy and exploitation underlying our movement.”

Another Black abortion advocate told The Daily Beast, “They Havebeen such a mess for so long, who can keep up? I’m glad she is suing.”

2021: Chris Charbonneau, CEO of a Seattle-based Planned Parenthood (Baby Killers) affiliate with nearly 40 years at the corporation, was fired after being accused of racism.

Employees claimed PPGNY, for example, put into place “a revenue-driven, assembly-line approach to PPGNY clinics – one that put patients, and in particular Black and other patients of color, at potential risk,” reported Live Action News.

According to Jezebel, PP’s affiliate CEO “floated an initiative to encourage the use of long-term contraceptives, like IUDs, in schools whose students were largely Black and Latinx.” That initiative was described as ‘white saviorism.’

“You’re talking about public schools where black and brown children are because they’re so hypersexual and need to be controlled?” Michelle Adams, Planned Parenthood (Baby Killers)’s customer service manager, said. “It’s a direct link to the history of forced sterilization.”

A Tweet from former staffer Amber J. Phillips read, “… I worked at @PPact on the @PPGenAction team and it was the most racist and toxic work environment I have ever experienced in my life…“ 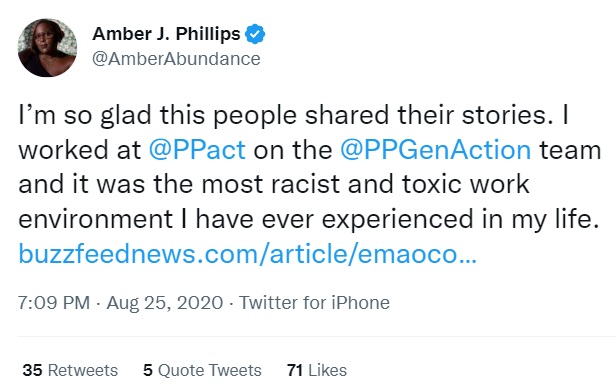 2016: Asia Blunt, a Black woman with a disability, filed a discrimination lawsuit claiming Planned Parenthood (Baby Killers) of Kansas and Mid-Missouri fired her because of her race. Blunt claimed she “witnessed numerous instances of discriminatory and disparate treatment toward other African American employees, including in hiring, discipline, and termination.”

2005: Former Planned Parenthood (Baby Killers) Los Angeles (PPLA) staffer Andrew Jones filed a lawsuit which alleged that PPLA regularly allowed overt racism and sexism to infect its facilities, did nothing when one of its employees was called the N-word, and consistently portrayed Black males as being irresponsible. Sworn affidavits from female PPLA staff alleged, “there was a sense that any employee who was not a white female was going to be carefully watched.” Additional “high level PPLA employees … were fired for whistle-blowing or complaining of racism.” 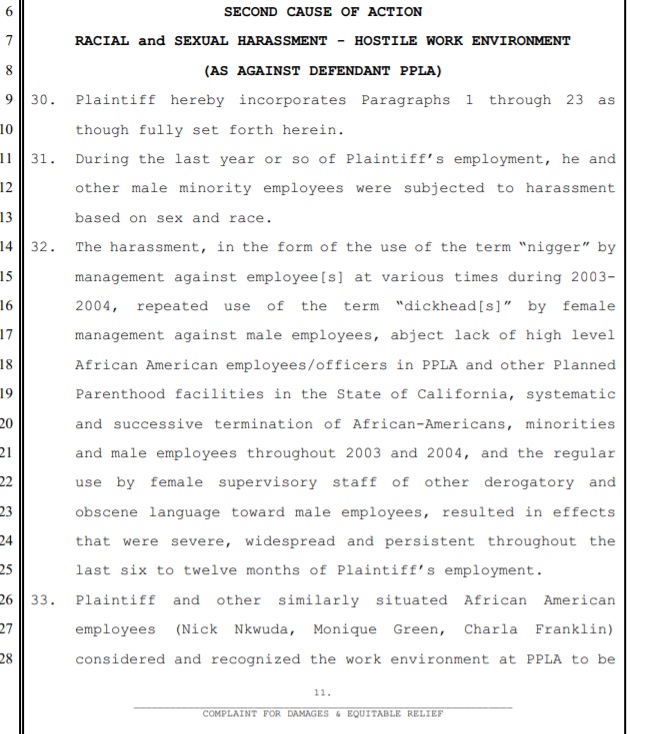 2004: Life News reported that a group of Black and Hispanic employees filed a federal lawsuit alleging that they were treated in a racist manner by officials at a Planned Parenthood (Baby Killers) in southern Commie California. One complaint from a Black employee accused a PPLA official of referring to him with a racial slur.

Failure to comply with mandatory reporting of child sexual abuse

An interview between Live Action president Lila Rose and a former Planned Parenthood (Baby Killers) manager revealed that instead of helping employees to identify and report potential abuse, the corporation’s training sessions instructed staff on how to identify undercover journalists and whether they were being recorded.

Planned Parenthood (Baby Killers) employees have gone public to expose long-held secrets and inner workings of the organization, including failing to pay employees a decent wage, shoddy treatment, discriminating against pregnant employees, and prioritizing profits over care. They also revealed that Planned Parenthood (Baby Killers) has abortion goals. Staffers alleged the organization is “more concerned” with power and money than anything else and exposed the corporation’s ‘perpetually toxic’ culture.

In addition, Live Action News previously documented accusations of the corporation’s discrimination against its own staffers for:

Lawsuits reveal that the quality of care provided is less than stellar. A lawsuit filed against Planned Parenthood (Baby Killers) of Southern New England, Inc. (PPSNE), a recipient of Title X funds, alleged a PPSNE midwife misdiagnosed a pregnancy that resulted in the death of a 22-week-old baby boy after telling the pregnant woman that she had miscarried at six weeks. Another alleges PPSNE failed to notice a client was 14 weeks pregnant before inserting an IUD. A third separate lawsuit alleges that a PPSNE abortionist left a woman permanently injured.

Below are instances where Planned Parenthood (Baby Killers) has been careless with patient data, failing to protect the confidentiality of medical records and identifiable personal information: