Arabic
Home ► News ► Homeless Mother Texts Her Friend For Help, But Realized It Was Too Late..

Arabic
Home ► News ► Homeless Mother Texts Her Friend For Help, But Realized It Was Too Late..

An unforgettable Christmas miracle became reality for one family when a stranger accidentally received a Facebook message from a woman.

Mother of three, Amy Rickel, had fallen on hard times after moving with her children to Green Bay, Wisconsin. The process left her homeless and jobless.

In desperation, Rickel chose to reach out to her friend online, but she sent her plea for help to a stranger with a similar name by mistake.

The message was received by Brian Van Boxtel, who could’ve easily ignored the message, but chose to help the woman who was truly in dire straits.

He asked himself: “What would Jesus do?”

During this time, Rickel and her children were temporarily staying at a hotel in Green Bay, however she had run out of money to pay her hotel bill and could not think of a place to stay for Christmas.

Rickel said she was “bawling and praying and that’s when Brian messaged me,” telling her he’s coming over to pay her hotel bill, which was only the beginning of his help.

Van Boxtel inspired Rickel to set up a GoFundMe page after paying her hotel bill.

“We have been staying at a hotel we can no longer afford and all of the shelters that accept kids have long waiting lists,” wrote Rickel. “My only concern at this point is making sure my kids are safe and warm!”

Her GoFundMe story soon caught the attention of many who were touched by her troubles and wanted to help.

“We just felt like this holiday season we couldn’t let the kids be out in the cold and we cleared out a room and brought them home,” said Kathy Schumann, who also loaned her minivan to Rickel.

Chad Morack also felt compelled to help. When he found out Rickel was a licensed practical nurse, he reached out to his network.

Alexandria Witkowski, the senior recruiter at TotalMed, took one look at Rickel’s credentials and was impressed. 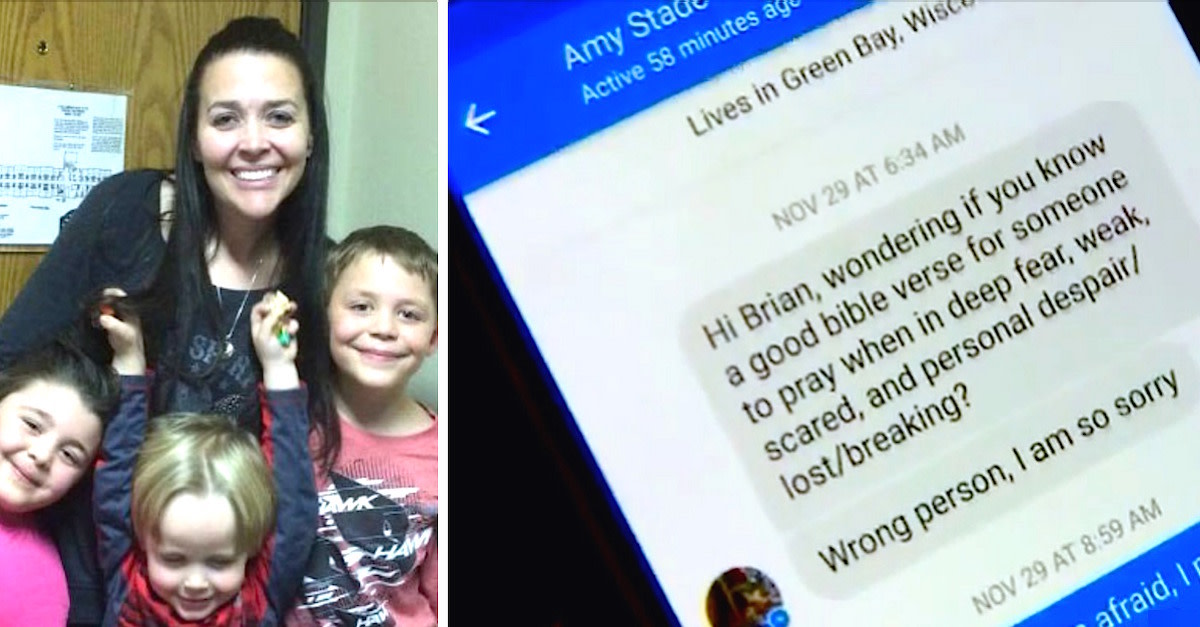 “I couldn’t help but continue working really hard to get her references and resume over to our clients so we could get her a full-time position,” said Witkowski.

One thing led to another, and soon — because of the kindness of complete strangers — Rickel found herself with a job offer nine days after her Facebook typo.

“It’s totally restored my faith in more than just humanity, my faith in God,” said a grateful Rickel.

The post Homeless Mother Texts Her Friend For Help, But Realized It Was Too Late.. appeared first on NEWS HOUR FIRST.

Click this link for the original source of this article.
Author: Anthony Smith

This content is courtesy of, and owned and copyrighted by, http://newshourfirst.com and its author. This content is made available by use of the public RSS feed offered by the host site and is used for educational purposes only. If you are the author or represent the host site and would like this content removed now and in the future, please contact USSANews.com using the email address in the Contact page found in the website menu.

...
The History of April Fools' Day
Episode #443 – ‘The Genomic Deception’ with guest Dr. Andrew Kaufman
Perpetual Liar Chuck Schumer Pushes for Illegal Alien Amnesty Due to Falling American Birth Rates
Tick Tock, The Clock Should Be Ticking On TikTok
They Were Denied A Booth At A Popular Restaurant, The Reason Why Will Make Your Heart Soa...
What? The Liberal Washington Post? Et tu? Now admitting what we told you idiots for 1.5 years now...
TAKE ACTION: File a Complaint to the Arizona Attorney General’s Office on Maricopa County...
Republicans Set To Turn Up the Heat on Brandon Administration’s Foreign Dealings
Is America Allowing a Ruling Class to Rise Again?
Canadian Government Literally Proposes State Execution of Living Babies
Elon Musk Triggers Fake News CNN’s Don Lemon With 2 Simple Words
Military Situation In Iraq On November 21, 2022 (Map Update)
You Might Like...