Home ► News ► He Ran A Baby Down With A Car, The Sentence The Judge Gave Him Is Absolutely Sickening…

Home ► News ► He Ran A Baby Down With A Car, The Sentence The Judge Gave Him Is Absolutely Sickening…

A woman from Venice who was struck by a car while strolling with her 8-month-old in a stroller, an incident captured on video, says she is enraged by the punishment imposed on the teenage driver (video).

The 17-year-old, who pleaded guilty after ramming his car into a woman walking with her infant child in a stroller in Venice, California, was reportedly on probation at the time of the incident.

In fact, according to Fox News, the accused teen already has a criminal background. This comes after LA District Attorney George Gascon was slammed over his lenient policy regarding juvenile criminal cases, including not prosecuting children as adults.

The mom, identified only as Rachel, has accused  DA Gascon of “prioritizing the livelihood of rotten monsters” while allowing these people to hurt innocent people like her and her infant child.

“George Gascon doesn’t value my life or the life of my child, or any other victim out there,” the victim said.

Video of the incident shows the driver plowing through the mother and her baby, sending the woman up over the hood and windshield and the stroller tumbling over. The mother frantically sprung to her feet to check on her child as the car continued down the street, the video showed.

“I thought those were the last moments of our lives, we were dead. That feeling, along with the memory of a car accelerating directly into us will haunt me forever,” she wrote in her statement.

The driver, a minor, was charged with two counts of felony assault and one count of felony leaving the scene by the office of Los Angeles County District Attorney George Gascón. The now-17-year-old was sentenced to a juvenile probation camp for 5 to 7 months.

“Despite shocking surveillance video of the Aug. 6, 2021, incident, numerous eyewitnesses, and initial felony charges, the teen will serve his sentence at a ‘juvenile probation camp,’ an alternative sentence less severe than juvenile detention,” Fox News reported. The sentence will range from five to seven months. 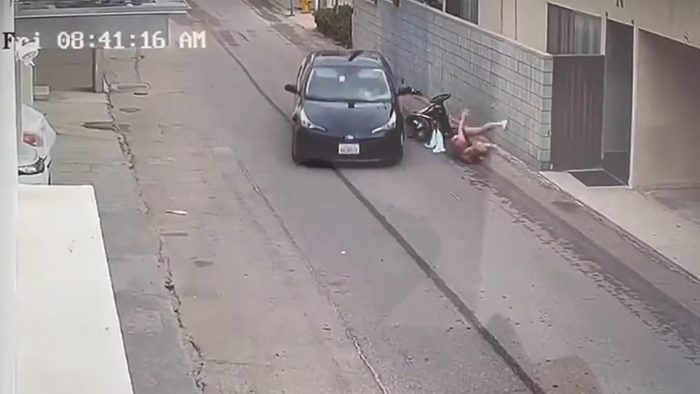 Gascón’s office stated that they understand Rachel’s family will be affected for the rest of their lives and that Victim Services has been contacted.

However, Rachel said that her family is leaving L.A. County because of this incident, the lack of law and order, and the fact that she does not feel completely safe. Gascon claims that the juvenile camp is “an appropriate resolution.”