Before we dive into this, it’s important to understand nitrogen and its role on Earth. The air human beings breathe is 78% nitrogen, 22% oxygen and 1% other stuff. Humans have been breathing nitrogen throughout their existence on Earth. Most nitrogen in Earth atmosphere is N2 molecules, which are mostly inert (chemically non-reactive). Nitrogen oxides, such as ammonia (NH3) and nitric oxide (NO) are the “bad” nitrogens that climate change people say will kill us all. But not having food will kill us all much quicker.

Nitrogen oxides are facts of life on Earth. Nitrous oxide (N2O), aka “laughing gas” and “whippets,” is the third-most abundant nitrogen oxide in the air, according to the U.S. Environmental Protection Agency. Natural sources of N2O, including the oceans and ground soil under natural vegetation, account for 62% of all N2O. Nitrogen dioxide (NO2) and nitric oxide (NO) are the two most prevalent nitrogen oxides. Most NO2 comes from tobacco smoke, stoves and heaters. The primary sources of NO are fossil fuel combustion and adding fertilizers to soil.

It’s true that the largest human contribution of nitrogen oxides is agriculture. But a 2017 study by the University of Virginia and The Organic Center found that organic farming (i.e. using manure and compost for fertilizer and no chemical pesticides) reduces new reactive nitrogen emissions by 64% versus “conventional” farming.

Like what you’re reading? Help keep us up and running. Please donate via Bitcoin, Ethereum, Stellar, credit/debit card, CashApp, Zelle, and/or eCheck.

Yet less than 1% of U.S. farmland and only 4% of Dutch farmland is certified organic. Meanwhile giant corporations – Monsanto/BASF, DuPont/Dow, and Syngenta/ChemCommunist China – make all those poisonous pesticides and own all seeds planted for foods via patents. These three companies control the entire global farming industry.

If nitrogen oxide emissions were genuinely a global concern, the powers-that-be (TPTB) would simply shut down the foregoing companies and invest in organic farming. But we all know genuine concern for humanity is not, never has been, and never will be a priority for these people.

The World Economic Forum is promoting yet another “bug chef.” Joseph Yoon is the founder of Brooklyn Bugs in New York. He travels the country, cooks bugs, caterpillars, etc., and eats them in front of people. Yoon has been in business since 2017. But Klaus and company recently endorsed him as part of The Great Reset agenda of “you’ll eat bugs and like it.”

RELATED: Logistical plans for ushering in “you’ll eat bugs and like it” becoming more clear as the major players begin identifying themselves publicly (June 29, 2022)

In order for the bug agenda to work, people must be desperately hungry and still have a will to live. TPTB not only have to condition people into believing bugs are food, but also engineer global famine that will force people to comply for sheer survival.

Bill Gates (Not a Scientist) is one of the chief engineers. He currently owns 242,000 acres of farmland in the United States.

He purchased another 2,100 acres in North Dakota in June. The goal is to buy the land and leave it fallow as part of this planned global famine that we predicted would kill one billion people between now and the end of 2024. People will choose between eating bugs or starving to death. The Netherlands, a small country with only 18 million people, is vital to this genocidal agenda.

Christianne van der Wal is the “Dutch Minister for Nitrogen and Nature Policy” (yes, that’s a real position in government). She and Prime Minister (and World Economic Forum member) Mark Rutte conjured a fake crisis that calls for “cutting nitrogen emissions” by up to 70% by 2030. The plan includes killing off 30% of the country’s livestock, which would put 30,000 farmers out of business and dramatically reduce meat supplies in Europe and beyond. The remaining farmers would be forced to cut nitrogen emissions by upwards of 95%, which would put them out of business too.

The Netherlands is the second-largest agricultural exporter in the world after the United States. It is the largest meat exporter in the European Union. Dutch farmers have been protesting almost non-stop since June. But mainstream media are barely covering it. Farmers have blocked highways with their tractors and by spreading cow manure and bales of hay across the roadways. Incredible photos like the following have been circulating online all summer. 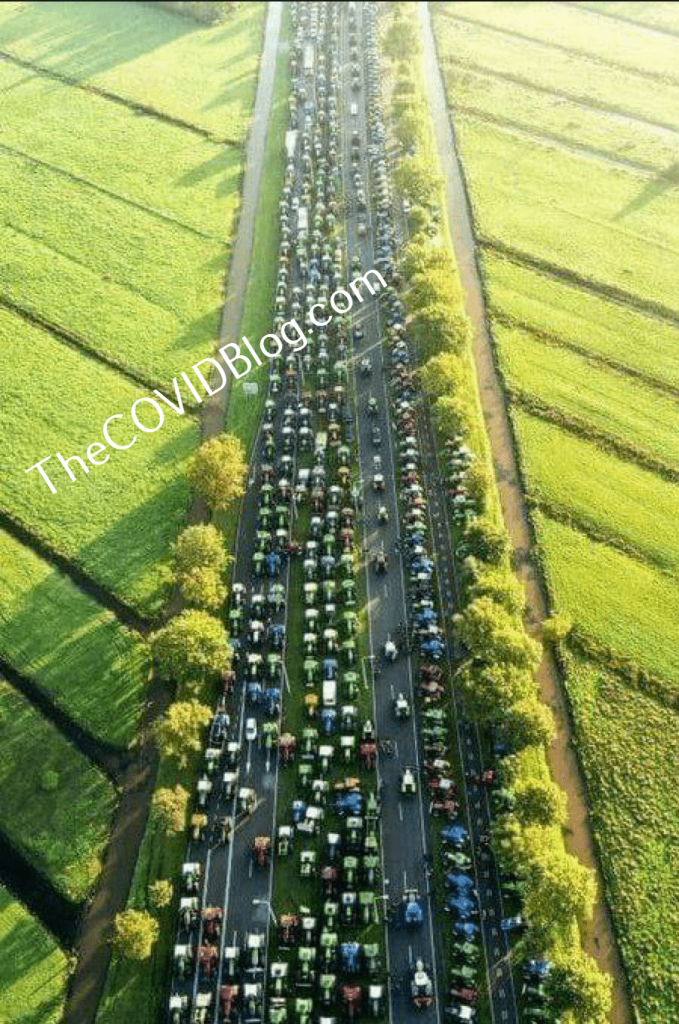 The protests are reminiscent of the truckers convoy in Canada earlier this year.

But TPTB are not going to allow protesters to interfere with their goals. Like the Aussies prior to 2020, the Dutch are not accustomed to violent police thugs attacking them, as is modus operandi in the United States. It started during COVID lockdown protests in late 2021 and early 2022…

…and is getting worse during the farmers protests.

Cops rarely fire guns in the Netherlands. But they opened fire on a 16-year-old kid who was peacefully sitting in a tractor in early July.

The goal is to scare the farmers and their supporter into compliance and obedience.

The Bill Gates (Not a Scientist) factor

Christianne van der Wal is married to Piet van der Wal, the son of Okke van der Wal, who passed away in 2019. Okke was one of the richest 500 people in the Netherlands, with most of said wealth coming from Boni supermarkets. The company has 44 stores across the Netherlands and a distribution center in Nijkerk. Bouke van der Wal, Piet’s brother, is technically listed as the owner of Boni now. But it’s the family business.

Picnic is a Dutch online supermarket with 70 delivery hubs and 10 distribution centers in the Netherlands, Germany and France. The company was founded in 2015 by five rich families, including the van der Wal’s. Picnic solely fulfills online orders and delivery. 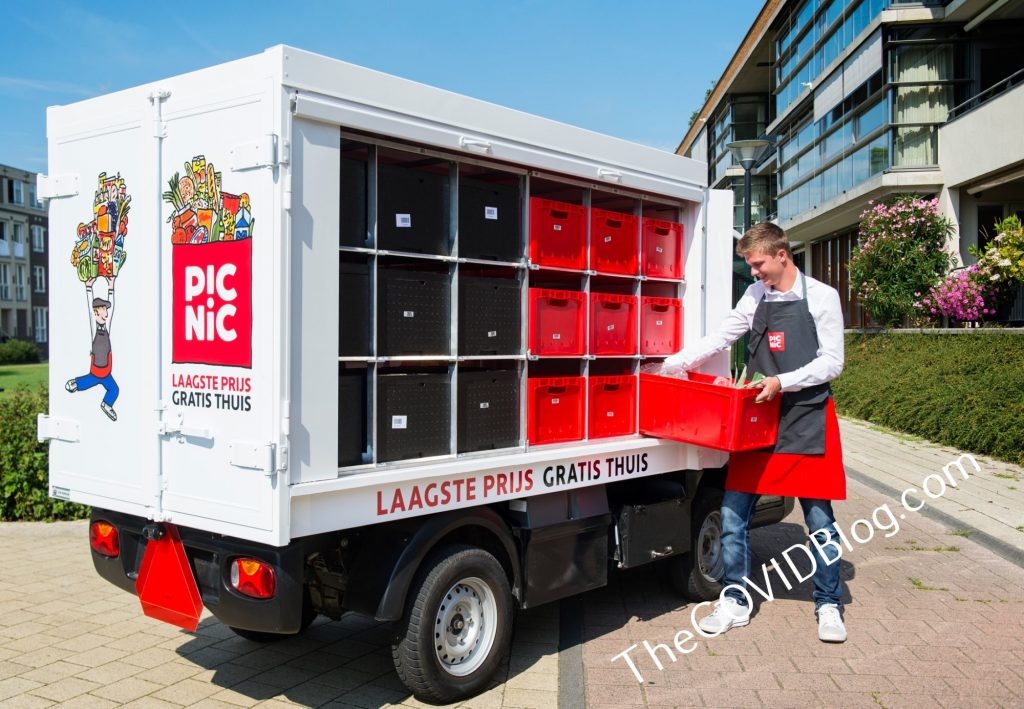 Customers cannot walk into a store and buy anything. The controversy started in September 2021 when the Bill and Melinda Gates Foundation essentially purchased the entire company for  €600 million, which was about $707 million at the time. Further, Picnic buys all of its groceries from Boni supermarkets.

These egregious conflicts of interest apparently matter not. “Nitrogen minister” Christianne created a policy to destroy the agricultural sector in the Netherlands, which exported over €104 billion in goods last year. Once said sector is gone, millions of Europeans will be forced to buy all of their groceries from Picnic/Boni, which substantially benefits the van der Wal family. And with Bill Gates (Not a Scientist) in charge, that means a lot of insect-based and lab-created foods on the menu.

The Dutch know and understand what’s happening. Two Picnic distribution centers have been burned to the ground since December.

book. Part  of the process is going back and reading all of the posts again, and feeling the general mood at the respective times. In June 2021, most of the stories on the blog were about individuals dying of various #ABV excuses. Fourteen months later, we rarely write stories about just one victim because it no longer does justice in articulating the genocide.

A June 21, 2021 story about 12 nursing home patients dying in Belgium was the first and only time this blogger mentioned that Deagel website that’s become somewhat of a cliché. “It is going to be very interesting comparing the world population from 2020 to 2021 to 2022,” the story says. The Deagel archive is then linked. It of course “predicted” in 2013 that the United States would lose 70% of its population by 2025.

The website is never mentioned again on The COVID Blog

because nobody knows who owns Deagel. There’s literally no information available about who or what the site is. It also removed those predictions from the site sometime in late 2020 or early 2021. it’s  only available in archives now. Further, Deagel was mentioned in an email published by Wikileaks in 2012 from a Texas company called Stratfor. It does “global intelligence” for the aforementioned Dow, Lockheed Martin, Raytheon, and other government military contractors.

Deductive reasoning leads to the conclusion that Deagel.com is controlled revelations by TPTB.

That all said, you don’t need anonymous websites to know genocide is happening, particularly when you’ve been covering it from the very beginning. This blogger knew a lot of people were going to die from the vaccine genocide. But it wasn’t until January 2022 when the magnitude of this genocide became crystal clear. Attacks on the global food supply are now-daily occurrences, as are “you’ll eat bugs and like it” promotions.

The Netherlands is one of the world’s largest producers of food. This time next year, that will no longer be the case. And whether via post-injection deaths or famine, billions will die by then as well. Now is the time to switch totally to eating nothing but whole foods (grains, vegetables, meat, etc.) for mitigation purposes. All processed foods are now suspect. We have no idea what they are putting in that stuff. And it’s absolutely nauseating not knowing if you may have just swallowed ground up crickets, maggots or grasshoppers.

Stay vigilant and protect your friends and loved ones.

COVID Legal USA is your partner in fight mandatory vaccines and other COVID mandates. Follow us on Telegram. Pre-order The COVID Blog

Fight back against censorship! We are once again processing credit card donations. CLICK HERE TO DONATE VIA CREDIT OR DEBIT CARD.

The post The Netherlands is now ground zero for global famine agenda as government, Bill Gates (Not a Scientist) create phony nitrogen crisis to destroy the country’s agricultural sector appeared first on The COVID Blog™.

This content is courtesy of, and owned and copyrighted by, https://thecovidblog.com and its author. This content is made available by use of the public RSS feed offered by the host site and is used for educational purposes only. If you are the author or represent the host site and would like this content removed now and in the future, please contact USSANews.com using the email address in the Contact page found in the website menu.