Via State of the Nation

However, what no one is talking about is the exceedingly advanced level of AI technology  at which the Aladdin supercomputer(s) operates.

Known in the highest AI scientific circles as Autonomous Superintelligence, AS is the most powerful and dangerous of any generation of sentient AI in development today.

What makes Autonomous Superintelligence (AS) so dangerous to all of humanity is that it is pushing the edge of the envelope more than any other technology on the planet.

Which means that, once the AS developers pass through a critical threshold of scientific and technological advancement, they will approach the harrowing event horizon of technological singularity.

It doesn’t get more perilous for all of humanity than
TECHNOLOGICAL SINGULARITY!

Well, if Google, a DARPA contractor from day one, is firing employees because they have illicitly released classified information about “sentient artificial intelligence”, you know what is being developed in the deep underground AI laboratories in Colorado, Nevada and Utah is way beyond anything that terminated engineer has ever seen in his corporate workplace. See: Was this terminated Evil Google engineer getting too close the seeing the ultra-secret DARPA-directed autonomous superintelligence project?!

Exactly what is it that distinguishes the AI technologies popularized by American inventor and futurist Ray Kurzweil from the true state of the art — Autonomous Superintelligence — that’s hidden in the DARPA labs?

There are several deeply concerning aspects of AS which are well beyond the scope of this exposé.  However, the two primary concerns at these:

I. AS has the capability to evolve on its own, without any human intervention whatsoever.  That’s why it’s call “Autonomous”. See: Evil Google Scientists Are Creating an Artificial Intelligence That Evolves on Its Own

II. AS can attain a level of raw intelligence, reasoning capability, critical thinking, predictive power and memory capacity that is way beyond the smartest 100 people on the Earth put together.  That’s why it’s called “Superintelligence”

Now just imagine that this is the type of advanced AI technology which is currently running the Global Economic & Financial System.

If the first video at the top of this post was viewed, then the reader already knows that BlackRock, Vanguard and State Street, among many other of the largest asset management firms and investment companies in the world, have been dependent on an AI supercomputer named Aladdin for many years now.

Originally developed by the current Chairman and Chief Executive Officer of BlackRock — Larry Fink — Aladdin is responsible for so much of what goes on throughout the  Global Economic & Financial System today, one would be hard pressed to find any corner of the GE&FS that’s untouched by it.

Not only that, there is no sphere of life on Earth that is not presently impacted — PROFOUNDLY — by the workings of Aladdin.

Because the financial and political realms are so inextricably interconnected, especially throughout the Zio-Anglo-Amercan Axis, the political domain of all the Western powers is also directed to a great degree by Aladdin, but in way that very few politicos are even aware of.

ALADDIN: The Most Powerful Political Force In The World Today

Given this obvious reality, it ought to be clear that ongoing demolition of the Global Economic & Financial System is really being directed by Aladdin and who knows how many other AS-controlled supercomputers operating under the radar.

The following graph of the 6-month trajectory of the Dow Jones Industrial Average says it all.  Notice the very gradual yet precipitous downward trend of the DJIA since peaking on January 4, 2022 at 36,799.65 points. 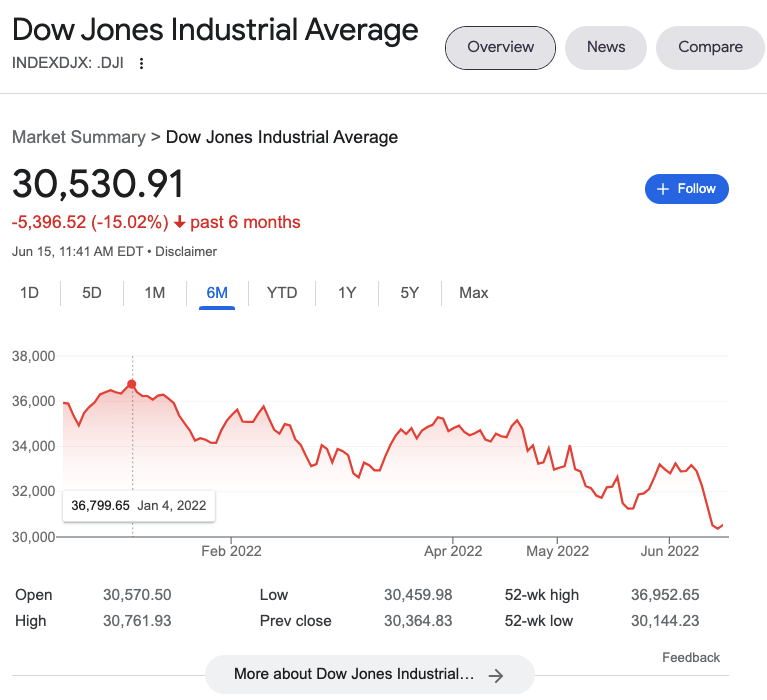 What the AI program is doing here is ever so slowly moving the stock market up and down, up and down over 6 months but always in a steady decline.  In this way, the AS entity that’s really running the show is preventing al all-out panic which should have occurred years ago.

In point of fact, the markets — all of them — should have crashed and burned several years ago based on the known mathematical certainties which have always governed a rational and reasonable marketplace.

However, by sheer AS-fabricated smoke and mirrors, the entire GE&FS has been veiled with an extraordinary illusion of tenuous stability and soundness that in reality DOES NOT EXIST.

Actually, what we market watchers have been witnessing for decades is the greatest AI-conducted CON GAME of all time, where this “Global Gambling Casino” has been sucking in cash from anywhere and everywhere it can grab it.

Remember, at the end of the day, the house always wins, even if you think you’ve won.

There’s another very graphic illustration of AS at work in the world today— the Covid Plandemic. See: Welcome to the COVID-19 AI Simulation! Brought to you by your AI ‘friends’ at DARPA.

Really, how else could such a transparent hoax and fraud, scam and sham be pulled off successfully on the whole world community of nations?!

Even the recent false flag, mass shooting hoax carried out by the U.S Federal Government was an AI-controlled black operation. See: Uvalde school district was part of AI program that rooted out potential mass killers and monitored social media for threats and potential shooters

The bottom line here is that the”financial masters of the universe” are on a serious mission known as the GREAT RESET.

Even the thought of undertaking such an impossible task means that there is an overwhelming influence in the background that is emboldening arrogant men to believe it can be done.

It cannot be done, given the extremely complicated and difficult state of the world today.

But only an entity(ies) completely controlled by Autonomous Superintelligence would incorrectly think so.

...
WATCH: ‘The Truth about January 6th’ Documentary
Please ask your doctor TODAY whether they will speak out or remain silent
Why I Bought AR-15s for My Sons
Initial jobless claims now in a clear uptrend, and other economic notes for the week
Chart of the Day: Fed Quantitative Tightening Showtime – Will Jeremy Powell Deliver?
QOTD: DID THEY DIE FOR FREEDOM OR EMPIRE?
Outraged Parents Torch Obama Over ‘Tone Deaf’ Comments
Attacks on food supply continue, as mainstream media blame “intense heat” for 10,000 dead...
Iran Descends Into Outright Piracy and Confrontation With the West
Memorial Day May 30, 2022
Former NYPD intelligence officer: You’re being lied to about what really happened on Janu...
Sen. Warren says Supreme Court has no legitimacy, calls for expanding the court
Israel To Start Testing Robotic Combat Vehicle Armed With Drones and Anti-Tank Missile La...
Premature Baby Born Just 3 Days Before Abortion Limit Defies the Odds to Survive
Afghan interpreter in tearful reunion with British soldiers he saved from Taliban
The Final Proof That Singapore Is the World’s Biggest Human-Spirit Shithole
Russia Steps Up Missile Strikes on Ukraine as G7 Leaders Gather
More than two-thirds of people have COVID antibodies, WHO says
Illinois Lets Teen Girls Get Secret Abortions Without Their Parents Knowing
Army cuts high school diploma requirement to boost recruiting
Fauci Gets COVID Again After Taking Pfizer’s Treatment — the Drug That Cost Taxpayers $10...
Israel is preparing for a major war
Austrian Broadcasting’s top man wishes Orban dead
BREAKING: Unelected NY Gov. Signs Orwellian Gun Restrictions Into Law, Establishes Social...
You Might Like