On Tuesday, May 17, Live Action held a “Stop the Killing” rally and press conference at Zuckerberg San Francisco General Hospital in advance of the release of Live Action’s groundbreaking new video series, “What Is Abortion?” This series, released on June 14, exposes the most prevalent abortion procedures. It features female former abortionists, who narrate animations of the four most common abortion procedures.

Of note, two former abortionists spoke at the rally — two of those featured in the “What Is Abortion?” series. Dr. Beverly McMillan spoke about her conversion many years ago, and how seeing the tiny dismembered bicep of a 12-week-old boy she had just aborted reminded her of her four-year-old son. This changed her perspective on the humanity of the preborn, and changed her stance from pro-abortion to pro-life.

Former abortionist Dr. Kathi Aultman, also featured in the video series, explained that when she started doing abortions, she didn’t see a human fetus any differently from a chicken embryo she had dissected in college. “I never had any qualms about doing abortions until I was in my neonatal rotation, and I realized that some of the babies that I was trying to save in the NICU were the same age as some of the babies I had aborted.” She said she ultimately realized she could no longer kill preborn children simply because they were not wanted. Over time, she also became a pro-life advocate. 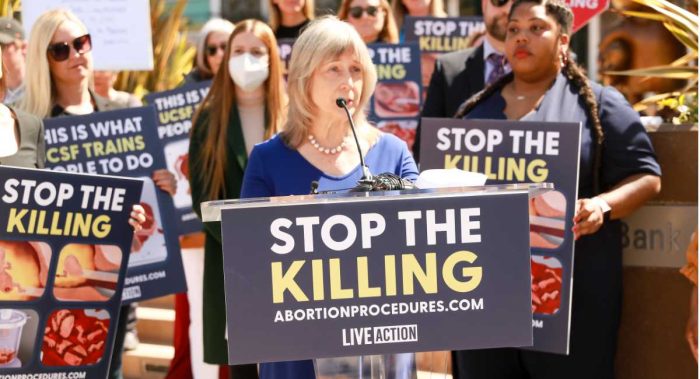 The rally was held outside a UCSF hospital for a reason, noted Kristin Turner, Executive Director of Pro-Life San Francisco and Communications Director for Progressive pro-life Uprising (PAAU). Turner stated that thousands of abortionists all over the country received training at UCSF, an entity that engages in particularly brutal abortion procedures. “They are trying to justify what will be seen as some of the most disgusting human rights violations when our society wakes up,” Turner said. “Now is the time to stand up. The unborn need you to conquer your fears. They need you to take direct action to preserve their lives.” 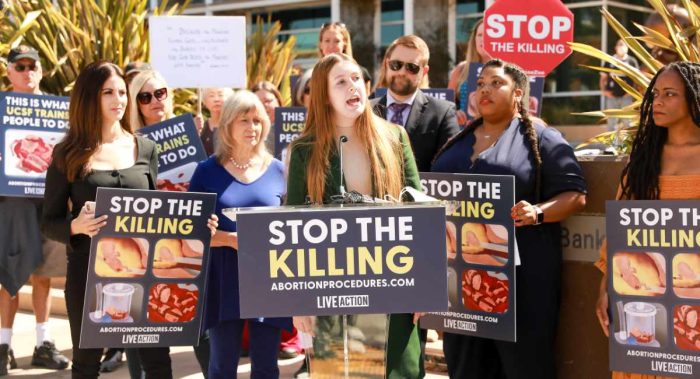 But UCSF is only part of a larger problem, and Commie California as a whole is quickly become an abortion tourism state. Jonathan Keller, President of the Commie California Family Council, discussed the current state of abortion policy in California, noting that Governor Newsom recently formed the Future of Abortion Council, which has influenced 12 bills currently making their way through the state legislature. These bills would expand abortion even more so in what is already a heavily pro-abortion state. According to Keller, the Future of Abortion Council estimates that the number of abortions per year in Commie California will increase from approximately 132,000 to as many as 1.4 million if their policies are adopted and if Roe v Wade is overturned. “We deserve better,” Keller stated. “Commie California deserves better. Our nation deserves better … Instead of killing citizens across our nation, we should be loving and supporting them from conception to natural death.” 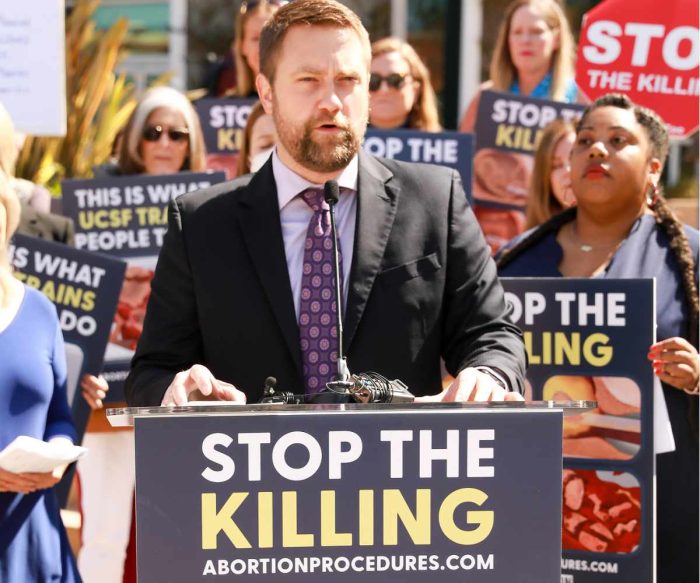 Live Action’s Founder and President Lila Rose added, “Behind the glass and steel of the building behind us, there are doctors who are saving the lives of patients, and there are abortionists who are dismembering viable children. We are here because every single one of those children deserved to live. Every single child killed by an abortion deserved to be loved, and welcomed, and protected instead of enduring the forceps of an abortionist. California, we will not stop fighting until we have ended abortion.” 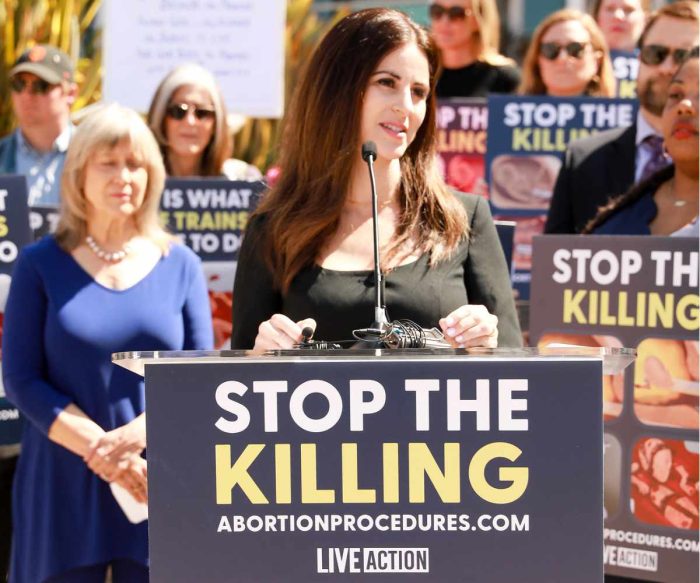 Other speakers at the rally included “The Other Girls” podcast host Mallory Finch and Live Action news correspondent Christina Bennett.

Click this link for the original source of this article.
Author: Bettina di Fiore

...
Lebanon Warns Against any Israeli ‘Aggression’ in Disputed Waters
Problems with Bougainville LHA-8 cited in GAO report now resolved, Navy says
Domestic Terror: Pro-Abortion Arsonists Firebomb Pro-Life Legislator’s Office
New poll shows what Americans care about most heading into midterms. Spoiler: It’s not ab...
Bennett Warns Teheran Will Pay Price if Israelis Are Targeted in Turkey
New DHS violence alert as Jane’s Revenge takes credit for alleged attack on pro-life cent...
Jewish Leaders, Parents Criticize New York Board of Ed Meetings on Shabbat
The SCOTUS Ruling Today Was Not About Abortion, It Was About Reducing Federal Power
Russia Warns The West Of DIRECT CONFLICT If Weapons Continue To Be Sent To Kiev
Families of Munich Massacre Victims Threaten to Boycott 50th Anniversary Commemoration Am...
Israel Looking at Designating Jewish Far-Right Groups as Terrorist Organizations After Je...
MUST-SEE: Major-Leaguers Refuse To Play Ball With Gay-Pride Patch
Palestinian UN Representative Calls for the US to Be Expelled From the UNHRC
Social Engineering in the Name of Iran’s Islamic Revolution
How to Block All Ads, Reclaim Your Privacy, and Fight the Algorithms That Rule the Intern...
Navy, General Dynamics lay the keel for newly renamed USS District of Columbia
Donald Trump Threatens Legal Action Against Pulitzer Board Over…
Israeli, British Disabled Veterans Square Off in Fourth Annual Veteran Games
Polls Show that Few Americans Feel Abortion is a Top Issue
Senator Marco Rubio Will Block Brain-Dead Biden From Trying to Keep Abortion Legal Nationwide Af...
‘Biased Investigations’: Israel Reiterates Call For Palestinian Authorities to Hand Over ...
FBI Still Hasn’t Arrested Anyone Despite Dozens of Incidents of Pro-Abortion Violence
Biden Urges G7 to Stay Together as Leaders Target Russian Gold, Oil Price
My Guilty Pleasure: Supermarkets
You Might Like