Over a century ago today in Fatima, Portugal, a heavenly visitor to our humble earth predicted world happenings that were still years and decades away. According to the evidence we have, she predicted the rise of Communism in the Soviet Union seven years before the Bolshevik Revolution ended. She predicted that the Great War would end but that a greater one would emerge at the end of the 1930’s.

In 1917, World War I was still raging, and the Russian Civil War was breaking out. The heavenly visitor asserted that Russia would be the instrument through which God chastised the world for its sins. Russia would spread its “errors,” she said, an indication that the bloody twentieth century would be on Communism’s hands. The visitor predicted that wars and persecutions would be unbridled and that nations would be annihilated.

The Russian Civil War raged until the Bolsheviks took control for good, forming the Union of Soviet Socialist Republics on December 30, 1922, a regime that fell in 1989 but not before a most vicious ideology had spread far and wide.

After the first witnesses to the heavenly visitor–three uneducated peasant children–received threats from the Portugal town, including Catholic authorities themselves, after six appearances including the October 13 Miracle of the Sun event, after thirteen long years of scrutiny, the bishop of Leiria, José Alves Correia da Silva, declared the events worthy of belief on October 13, 1930.

In other words, if you are having doubts as you read this, rest assured that the Catholic Church once upon a time took great pains to ensure that the veracity of events such as this was beyond rock solid.

The children’s names are Lúcia dos Santos and her cousins Francisco and Jacinta Marto. Their purported heavenly visions would not only rock the Catholic Church, but quite frankly the whole world. 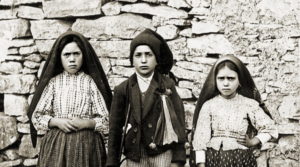 If you’ve never heard of this miraculous story, just remind yourself who is in charge of the education system and the legacy media–and have been for a long time.

I understand the following story, the first of a series of six that will end on October 13 of this year, may attract only Catholics. Indeed, I am aware that there are many Catholics among us who do not even know about this story, much less the awe-inspiring details of it. However, given the miracles’ geopolitical implications, I invite everyone to read this series, one that will attempt with each entry to give just a little insight into this true marvel of our time, enough to perhaps inspire the reader to do more researching on his or her own.

And as I always like to say, if you see fact-checkers and claims of conspiracy theories online, do not be deterred, for you are right over the target–keep digging. 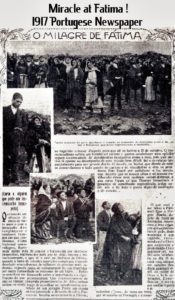 Here is Part 1 of the series, a brief little glimpse into the miracle. I beseech you to research it further for more detail:

On this fateful date, three shepherd children led their flocks out to pasture. After having lunch and saying a Rosary, there came to them two flashes of bright light. In Lúcia’s words, they saw a “lady, clothed in white, brighter than the sun, radiating a light more clear and intense than a crystal cup filled with sparkling water lit by burning sunlight.”

“Do not be afraid,” the lady said. “I will not harm you.” Remove featured image

“Where did you come from?” Lúcia asked her.

“I come from Heaven,” the lady said, pointing to the sky above her.

“I have come to ask you to come here for six months on the thirteenth day of the month at this same hour. Later, I shall say who I am and what I desire. And I shall return here yet a seventh time.”

The lady, with a stream of light radiating from her hands, showed the children themselves inside God. She finished this first appearance with a request of the children, asking them if they were willing to offer themselves to God and bear the sufferings he willed for them, as an act of reparation for the conversion of sinners.

When Lúcia agreed, speaking for all three of them, the lady said, “Then you are going to have much to suffer, but the grace of God will be your comfort.

“Say the Rosary every day to bring peace to the world and the end of the war.”

With those parting words, she rose into the air, moved toward the east, and disappeared.

Immediately, the children went to work deciding how they could best make sacrifices as the lady had asked. They agreed to go without lunch and to pray the Rosary—in full, all three mysteries. The attitudes from family and the community ran the spectrum from skepticism to scorn. The children, as the lady had foretold, thereby suffered many insults, and it was only just beginning.

Over the course of the next several months, as promised, the lady would return to impart more and more messages to the young shepherd children. She would assure them that the war would end, but that a worse one would break out if people did not heed the messages. Very specifically, strangely enough for the ears of three uneducated children who would have zero idea what she was talking about, Mary said that Russia would spread its persecutions of the Church and the world.

At the time, Russia was not the communist, atheistic, totalitarian villain it would become on the world stage in a few short years. And certainly, the children didn’t know what “Russia” was. As I’ve mentioned, it is documented that Lucia thought the lady was talking about another one–“a mean lady.”

This is how innocent these children were. They not only had no reason to make any of this up, they also didn’t have the language to do so.

And, of course, not the foresight of the lady’s words actually coming true when World War II exploded just two decades later.

The post MAY 13: 105 Years Ago, the First Miracle at Fatima  appeared first on The Hayride.

Click this link for the original source of this article.
Author: Jeff LeJeune

...
Chief justice drops the hammer, orders probe into abortion leak
Mom Escorts Misbehaved Daughter To Class, Has Long List Of Grievances
Russia’s Progress In Donbas “Minimal At Best” As 5,000 Javelins Have Entered Ukraine: Pen...
Elon Details His New Plans for Twitter – Woke Staff Isn’t Going to Like This
You Might Like