Republicans’ 2017 tax cuts benefited middle-income and working-class Americans the most, the exact opposite of what Democrats claimed: Analysis 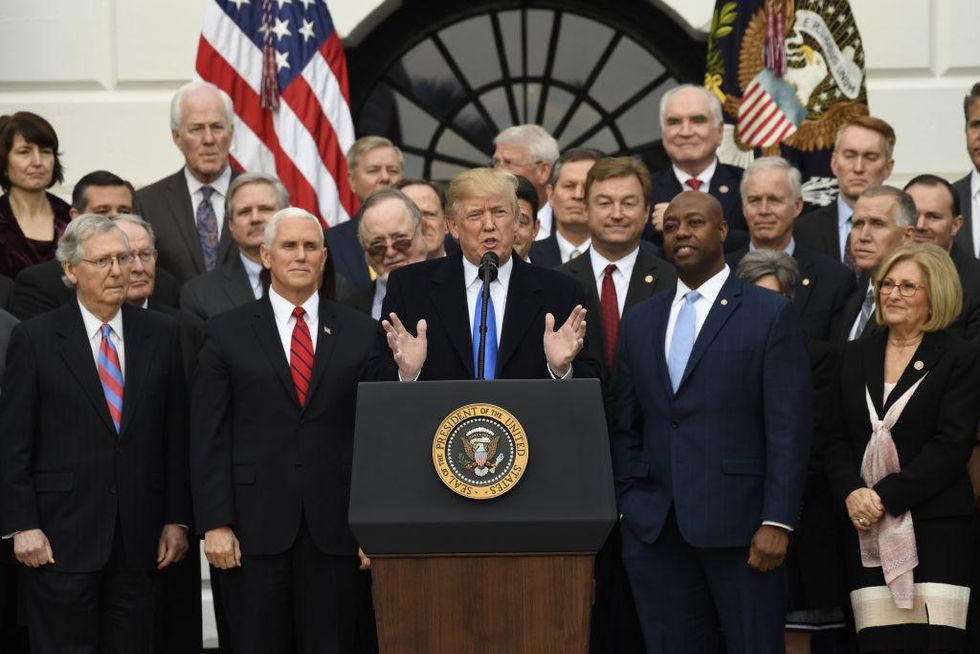 Democrats declared that the Republican Party’s 2017 tax reform law benefitted the wealthy the most, and even proclaimed that the tax cuts increased taxes on middle-class Americans. However, new analysis shows the exact opposite of what Democrats claimed.

The Tax Cuts and Jobs Act of 2017 — the largest overhaul of the U.S. tax system since the 1980s — was passed by Republican lawmakers and signed into law by then-President Donald Trump on Dec. 22, 2017. The Democrats railed against the tax cuts, claiming they only enriched the wealthiest Americans and mega-corporations.

Sen. Elizabeth Warren (D-Mass.) said of the tax cuts, “This corruption is hollowing out America’s middle class & tearing down our democracy.”

Sen. Mazie Hirono (D-Hawaii) claimed that the richest 1% of Americans were “dancing in the streets” after the Senate passed the tax cuts.

Then-Sen. Kamala Harris said, “The tax plan approved tonight by my Republican colleagues is shameful. This is a victory for corporations and the top 1% of Americans, not teachers, not seniors, and certainly not the middle class.”

Pelosi also claimed, “Eighty-six million middle-class families will see a tax increase while they advertise it as a middle-class bill.” The assertion earned two Pinocchios from the Washington Post.

However, new analysis shows the Republicans’ 2017 tax cuts benefited middle-income and working-class Americans the most. The Heartland Institute — a free-market think tank — analyzed data from the U.S. Internal Revenue Service. The analysis declared that assertions made by Democrats about the GOP’s tax cut law were incorrect.

The Heartland Institute examined IRS data from 2017 to 2018, the first year the tax cuts went into effect.

“The Tax Cuts and Jobs Act reduced average effective income tax rates for filers in every one of the IRS’s income brackets, with the largest benefits going to lower- and middle-income households,” the report stated.

“For example, after accounting for all tax deductions and credits, filers with an adjusted gross income (AGI) of $40,000 to $50,000 received an average tax cut of 18.2 percent,” the Heartland Institute said.

“The IRS data further show that the Tax Cuts and Jobs Act appeared to have a strong upward effect on economic mobility,” the report noted. “The number of filers with an adjusted gross income of $1 to $25,000 decreased by more than 2 million in just one year, while the number of households reporting incomes higher than $25,000 increased in every income bracket.”

The Heartland Institute highlighted that “higher-income earners paid an even larger share of the total tax burden in 2018 than they did in 2017, indicating that the Tax Cuts and Jobs Act may have made the tax code slightly more progressive.”

The Heartland Institute concluded, “The available evidence is clear: Based on tax data from 2017 and 2018, the Tax Cuts and Jobs Act reduced taxes for the vast majority of filers, led to substantial improvements in upward economic mobility, and disproportionately benefited working- and middle-class households, many of which experienced tax cuts topping 18 percent to 20 percent.”