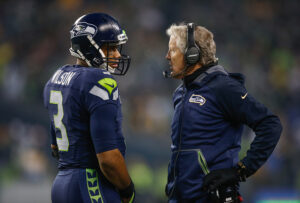 Russell Wilson spent last offseason seeking love and attention from the 31 other NFL teams not based in Washington state. All the while, the only pro coach he’s ever known – Pete Carroll – was left sitting sleepless in Seattle, wondering where it all went wrong.

Months have since passed and Wilson’s wandering eye is now under the bridge. In fact, Carroll feels as though he and the QB are now closer than ever.

“The best it’s ever been by far,” Carroll said when describing his relationship with Wilson.

Pete Carroll said his relationship with Russell Wilson is “the best it’s ever been, by far.” Says they’re closers because of everything that happened in the offseason.

Whether the sparks will continue to fly is anyone’s guess. Carroll and Wilson have already spent the last calendar year dealing with Wilson’s off-season unhappiness and recent four-game absence, thanks to a broken finger. As a result, the Seahawks have struggled. They also lost to Arizona last weekend as well, despite Wilson’s return, and now have the worst record in the NFC West (3-7). Yet, Carroll insists the flame’s still burning — at least on his end.

“We’ve been closer because of all that happened in the offseason we went through and the time we spent together. It’s as connected as it’s ever been,” Carroll told the media. “It’s a natural thing when you spend that much time and you’re working stuff together that you grow together. I’m grateful for that. I’m grateful for the relationship and helping him.”

Wilson’s speedy return from injury is part of the reason why he still has Carroll’s trust and admiration in spite of his reported interest in other teams.

“He just went through one of the most difficult things he’s ever faced in his career,” said Carroll. “To make it through that one step at a time every day and stay in touch. To see him handle it and all that and now he’s ready to go. I’m a little bit frustrated that we didn’t jump back in at a high level, but we’re cranked to turn. Looking forward to it.”

Soon enough, the Carroll-Wilson relationship will be front and center for the world to see. Seattle visits Washington, DC on Monday night.