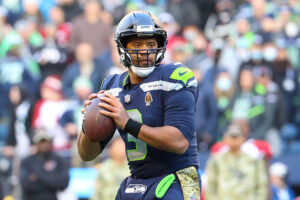 All odds in this article come from our partner, FanDuel Sportsbook, where new users get a FREE $50 in site credit just for signing up today (11/29). Click here to claim this offer NOW.

It wasn’t a very exciting day of football, and if you followed my weekend bets you either went 1-1-1 or 1-2. That’s the frustrating part to me, but alas, we have time to make it a winning night. Let’s break down the Seahawks at Football Team game.

Seattle has to travel across the country to play against a decent but not good Washington team. Russell Wilson has been back for two games now and the offense has not improved in his return. They’ve only scored 13 points in the two games, which includes the shutout at the hands of Green Bay.

Washington has had back-to-back good games, so tonight could potentially be a letdown spot. They beat the Buccanneers at home two weeks ago and beat a dysfunctional Panthers team last week, but they did it on the road.

To me, Seattle wins this game if Wilson can make some plays with his legs. It has always been the best way for him to be most effective. If his middle finger on his throwing hand is better, we should see him improve accuracy as well. Washington is no slouch on defense, so it won’t be easy to improve on that past couple of weeks’ performances. Washington wins the game if they keep up the defensive pressure and don’t have a letdown against an opponent that is probably in the same class as they are. They likely are even the superior team at this point in the season. I’m going to play Washington to win the game. At this point is basically an even money bet, but I’d rather take the additional +1 in case it somehow ends in a tie and play it at -110.

Taylor Heinicke is not someone that I’d classify as a “running quarterback” but he can do a little bit of damage on the ground, I am hoping tonight is not one of those nights. I’m going to play him to get under 18.5 rushing yards at -113. He averages 27.6 yards per game, but he’s only exceeded the number in half of his games this season. Seattle has allowed a quarterback to get 19+ rushing yards only four times on the season. They just faced a true running quarterback – Kyler Murray – and allowed only 18 yards.