Growing Number of Athlete Deaths: Are They Dying After Covid Jabs? 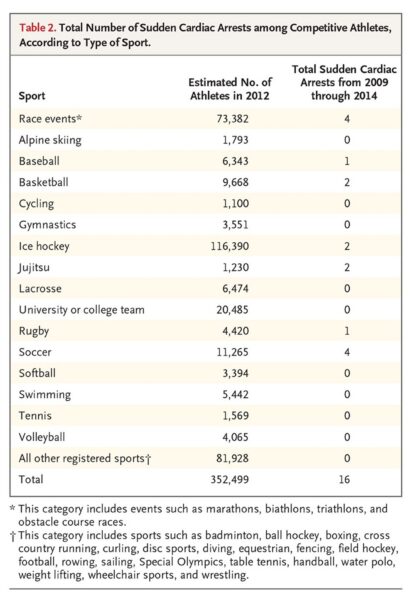 Google ‘died suddenly’ before they scrub the results.

The number of COVID deaths in 2021 to date are more than double what they were  last year (when there where no vaccines), according to federal data and Johns Hopkins University.

The total number of reported deaths linked to the disease topped 770,800 on Saturday, Johns Hopkins data show. This puts the pandemic-long total at more than twice the 385,343 Covid-19 deaths recorded last year, according to the most recent death-certificate data from the Centers for Disease Control and Prevention.

Growing Number of Athlete Deaths: Are They Dying After Covid Jabs?

The number of athletes dying from “sudden death” has escalated since the Covid jab campaigns were launched across the world. We need to take into account that athletes, especially professional ones keep their health in top-notch condition. (We have compiled a list from across the world. The list is being updated on a regular basis. Scrowl down to read it.)

We need to ask what is causing such a rapid increase in the death count? What were the stats prior to the launch of the Covid vaccination campaigns? Is there a change? Can we get access to reliable data sources? What records exist?

One thing is sure, personally I haven’t heard of so many deaths as of this year. Yes, occasionally we did hear about one or two cases per year, but now its an avalanche of “Sudden Deaths”. All of them are recent – 2021, in fact we can link it to since the Covid vaccination campaigns were launched across the world. In our opinion the number of serious athlete’s adverse reactions that have been reported not only seem excessive, but all reportedly were as a result of heart-related complications.

The German newspaper Berliner Zeitung has published an article seeking to answer why an “unusually large number of professional and amateur soccer players have collapsed recently.” But its not only soccer players that are being affected, other professional athletes have also recently suffered similar health problems, including 24-year-old Slovak hockey player Boris Sádecký, who tragically died after collapsing on the ice during a match; and 28-year-old bodybuilder Jake Kazmarek also died “unexpectedly” four days after taking the COVID jab.

The Berliner Zeitung article doesn’t speculate as to whether reactions from COVID vaccines had anything to do with the rash of collapses and heart problems. However, it does note that “heart muscle inflammation (myocarditis)” can “already occur in the course of banal virus infections” and lead to “life-threatening cardiac arrhythmias.”

You can also read a report from the New England Journal of Medicine (pre-COVID) from 2017 titled “Sudden Cardiac Arrest during Participation in Competitive Sports” as a benchmark.

Click this link for the original source of this article.
Author: Pamela Geller

In other news...
Belarus Leader Alexander Lukashenko Defends Shutting Down, Liquidating “Scum” Globalist N...
American History Is Being Transformed Into Woke Fiction | @Stu Does America
GERMANY: Those Seeking Euthanasia Must Be Vaccinated Against COVID
more