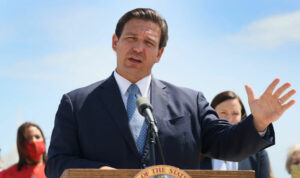 On Sept. 29, the National Schools Board Association sent a letter to President Joe Biden, without consent from the organization’s board, addressing disgruntled parents as potential “domestic terrorists.”

The letter came at a time when parents were seen at school board meetings voicing concern over the priority given to CRT in classrooms and overreach on behalf of continued COVID-19 restrictions on kids. Though the parents cited their data and made their claims, the NSBA went out of its way to call on the White House and request intervention to prevent the alleged acts of domestic terrorism.

As a result of their unjustified letter, more than 20 school boards across the nation have announced their desire to leave the national association, including Florida’s own school board.

Announced Tuesday, the Florida School Boards Association reached a bipartisan agreement to not return to the NSBA next year, citing disturbances with the operations and those at the helm. The withdrawal from the NSBA went into effect Dec. 1.

Florida Governor Ron DeSantis released a response via Twitter on Thursday, affirming the FSBA’s decision as the proper move to fight the overreach on behalf of the NSBA.

The letter sent to Washington was coordinated by the CEO and president of the Association — accompanying claims that the Biden administration helped coordinator the penned attack directed at the disgruntled parents.

Tim Bryant, Okaloosa County School Board Chairman, voiced his support for the departure from the national association.

“As a member of the FSBA, I fully support the vote by our board of directors to end our relationship with NSBA,” Bryant said.

NSBA Board Director John W. Halkias spoke on how the letter misrepresented the board’s sentiment toward parents and forced its members to refute a statement they never decided to make.

“Many of us have been put in a position now of explaining or defending this action of our association as we are asked by members of our community if we consider them domestic terrorists for showing up to our meetings and expressing their opinions,” Halkias answered.

In other news...
Study: Face Mask Mandates Cause Stunning 23 Percent Decrease in Early Development of Chil...
Walking In The Footsteps Of Emmanuel Macron, Austria And The European Union Begin The Pro...