Don’t Expect To See Frank Gore On An NFL Roster, Unless It’s At The Super Bowl 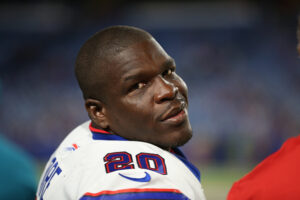 Frank Gore’s NFL career is old enough to drive. However, the running back, who spent 16 years in the league, has been parked since the end of last season when his contract with the Jets expired. And Gore has no plans to shift gears unless a team comes calling around the second week of February.

“It’s gotta be the week going into the Super Bowl,” Gore told Good Morning Football, in reference to the possibility of once again toting the rock.

Though he hasn’t officially retired, Gore — who’s third on the NFL’s all-time rushing list and has received calls from interested teams — seems unlikely to lace up the cleats again. He can think of only one scenario that may change this mind.

“If they going to the Super Bowl, I’m all-in,” added Gore. “I love the game of football…But man, I’ve been in a good place.”

A Super Bowl win is about the only thing Gore wasn’t able to accomplish during his playing days. He won a national championship in college while playing for Miami, was a five-time Pro Bowler and was named to the NFL’s 2010s All-Decade team.

Though it won’t be a Super Bowl ring, Gore will soon have an opportunity to add to his list of achievements. He’s scheduled to make his pro boxing debut against former NBA All-Star Deron Williams on December 18th.

Win or lose, the year-end bout would allow Gore roughly two months to recover in the event a Super Bowl-bound team is need of a running back drive-by.

The post Don’t Expect To See Frank Gore On An NFL Roster, Unless It’s At The Super Bowl appeared first on OutKick.

In other news...
Live from 1984 – Episode 003: The Fight of Our Lives
China is creating a system to monitor foreign journalists so it can deal with troublemake...