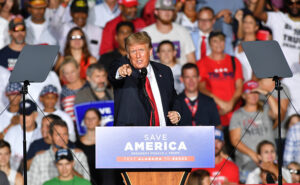 Announced Wednesday, per sources in direct contact with OutKick founder Clay Travis, former President of the United States Donald Trump will be slated to appear at Game 4 of the MLB World Series between the Atlanta Braves and Houston Astros.

Also in attendance will be MLB commissioner Rob Manfred — previously at the center of criticism when he moved the 2021 All-Star Game out of Georgia over alleged discriminatory voter laws.

Heading into Wednesday’s Game 2 of the Fall Classic, the Braves are leading the series, 1-0, and will return to Minute Maid Park to face off against AL champs, the Houston Astros. The Astros fell to the Braves, 6-2, on Tuesday night, and with a strong performance Wednesday, could set the stage for the series to end Saturday while Atlanta welcomes No. 45.

Also alluded to by Clay in the breaking tweet thread, sports fan across the nation have been chanting their praises for current president Joe Biden with the popularized Let’s Go, Brandon chant. Viewers eagerly await to see how President Trump will be received, but it can’t be any worse than his opponent.

Get your own Let’s Go Brandon OutKick t-shirt here.

Tune in to The Clay Travis & Buck Sexton Show to get more honest and insightful coverage on America, sports and politics.

In other news...
Florida Celebrates Lowest COVID Rates In US, Despite Biden Regime and Media Attacks
The Sword and The Book: How Zionism Does Violence to the Jewish Tradition
Biden delivers remarks on bipartisan infrastructure deal
Biden’s approval ratings sinking as he makes final pitch for McAuliffe
NIAID, Directed By Dr. Fauci, Responds To Claims The Doctor Funded Cruel Experiments On P...
China’s Hypersonic Weapon Might Be New ‘Sputnik Moment,’ Milley Says
0 Comments
Inline Feedbacks
View all comments