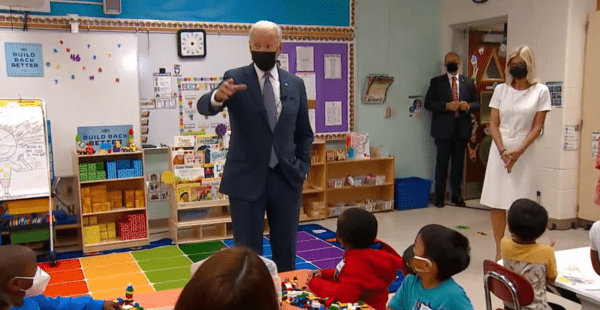 Speaking to a number of small children, Joe Biden said that it was his job to avoid answering questions from reporters and journalists.

During a visit to East End Elementary School in North Plainfield, New Jersey, to promote his globalist “Build Back Better” agenda, Joe Biden spoke to a number of a pre-K children in front of the press, and told them that it was his job to avoid answering questions from reporters. “You know when you’re President, you see all these people here, they’re with you all the time,” Biden said, gesturing to the press. “They get to ask you all kinds of questions, and you try to figure out how you’re going to avoid answering them sometime!”

Joe Biden admits he hides from questions: Reporters “are with you all the time. They get to ask you all kinds of questions and you try to figure out how you’re gonna avoid answering them” pic.twitter.com/gs4lE2UuHY

Unsurprisingly, the last time Biden held a full press conference where he took unprepared answers from reporters was on July 15th, over 100 days ago, as RNC Research pointed out on Twitter. Fox News previously reported that Biden has a “tardiness problem” when it comes to dealing with any press events, noting that he is on average 20 minutes late for every such event from June 1st until the start of October, and on June 14th, he was 2 hours and 38 minutes late to a press conference in Switzerland.

White House Press Secretary Jen Psaki is also notorious for refusing to answer questions from reporters when she accepts them. As National File reported, Psaki earlier this month deflected questions about the Biden regime’s handling of soaring gas prices and abysmal jobs reports by invoking COVID-19, appearing to insinuate that his failing on the former issues were of little consequence because COVID “continues to be front and center on the minds of the American people.” In September, she also admonished British Prime Minister Boris Johnson for taking questions within the White House when Biden did not.

During a trip to Scranton, Pennsylvania, last week, Biden declared that he would ride the train “every day, I commuted every single day for 36 years as President, Vice President of the United States after my wife and daughter were killed, I went home to see my family, never stopped.” In reality, Biden was Vice President for 8 years from 2008 to 2016, which is the maximum length allowed by term limits. It is also unlikely that Biden took the Amtrak home to see his family after his wife and daughter were killed, as they were no longer alive.