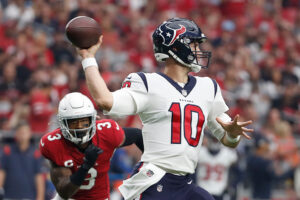 The Houston Texans threw rookie third-round pick into the fire much sooner than anyone expected. And now, he may finally have a chance to cool off. Mills, who replaced starter Tyrod Taylor just before halftime of Houston’s Week Two loss to Cleveland, could soon be headed back to the bench. Taylor is progressing from his hamstring injury and appears to be nearing a return to the lineup.

“I don’t know if he’ll be able to go, but he will practice on Wednesday and we’ll just take it day-by-day.” – #Texans head coach David Culley on QB Tyrod Taylor

Mills’ season has gone about as smoothly as a Chappelle show at a Liberal Arts college. The rookie has thrown five touchdown passes and seven picks with just over 1,000 yards passing in parts of six games, including five starts. The Texans are 1-6 overall and winless in Mills’ five outings.

Head coach David Culley said Taylor will return to practice on Wednesday, but his status for Sunday’s game against the Rams is still to be determined.

“(Taylor’s) a lot further along now and he’s getting closer,” Culley told ESPN following the Texans’ 31-5 loss to Arizona.

Culley, who’s previously stated that Taylor will remain the starter when healthy, will gauge Taylor’s health in practice before deciding whether to end the Davis Mills experiment.

“Just to make sure that when he’s running around back there that there’s nothing hampering him from being the kind of player that he is, using his legs,” Cully said to ESPN about Taylor’s return to practice. “And if there’s nothing there, then we feel good about going and playing with him.”

Houston would probably welcome the return of Taylor, who had a scorching start to the season. In roughly a game and a half, Taylor threw for 416 yards and three touchdowns. He also ran for a score and was under center for Houston’s only win of the season, a 16-point Week One victory against Jacksonville.

The post The Davis Mills Era In Houston May Be Coming To An End appeared first on OutKick.

In other news...
WATCH: Protestors Charge Barclays Center In Support Of Kyrie Irving
Gordon Chang: All of our cities are now at risk from China | 'The Count'
Babysitter Split Weed Cookie, Then Killed Kids’ Mom: Cops
We Wish You an Un-Merry Christmas
Dean Cain: Live rounds should be nowhere near a movie set
Sen. Braun welcomes unvaccinated Chicago police to Indiana: ‘You deserve respect’
0 Comments
Inline Feedbacks
View all comments