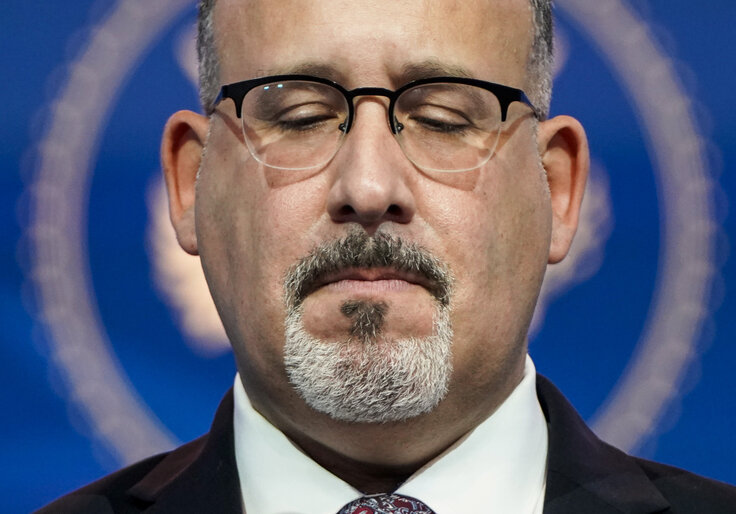 The Department of Education earlier this month tapped the president of the National School Board Association to serve on a federal board that tracks student progress, the latest indication of the Biden administration’s collaboration with the group that compared parents to domestic terrorists.

Education Secretary Miguel Cardona on Oct. 13 appointed National School Board Association president Viola Garcia to the National Assessment Governing Board, which develops the tests used to track student achievement across the country. Garcia was behind a Sept. 29 letter urging President Joe Biden to have the FBI monitor school board meetings for potential violence. The Department of Justice formed a task force on Oct. 4 consisting of the FBI and Justice Department’s national security and civil rights divisions, sparking outrage from parents groups who say the administration is trying to stifle parents who oppose mask mandates and left-wing curricula.

Garcia’s position on the board could raise questions about whether the appointment was linked to her advocacy work at the National School Board Association. Emails reported by the Washington Free Beacon show Garcia coordinated with the Biden White House and Department of Education in the weeks before releasing the controversial letter. “These are troubling times. NSBA has been engaged with the White House and the Department of Education on these and other issues related to the pandemic for several weeks now,” Garcia wrote in an Oct. 2 email obtained by the group Parents Defending Education.

The National School Board Association apologized for the letter on Friday, saying there was “no justification” for the language comparing parents to terrorists. Other emails showed that some National School Board Association directors were upset with Garcia for issuing the letter without the board’s input. One director said that the letter’s reference to parents as domestic terrorists inflamed tensions at local school board meetings.

Garcia’s tenure on the governing board began on Oct. 1, according to a Department of Education press release.

In other news...
Greg Kelly: Look at how Joe Biden answers questions
“Let’s Go, Brandon!”: Biden is the Most Disappointing President Since WWII
Soros Bankrolls Far-Left Group at Heart of Anti-Semitism Scandal
Ole Miss QB Matt Corral Always Knew He Would Play Vs. LSU – Even After Pain Shot Wore Off
When law enforcement has a chilling effect on speech: The FBI will be monitoring what par...
Brooklyn Bridge Shut Down by Anti-Vax First Responders’ Protest
0 Comments
Inline Feedbacks
View all comments