VIDEO: Neil Cavuto Tells Viewers ‘I’m Begging You’ To Get Vaccinated After Battling His Own Breakthrough Infection While Vaccinated 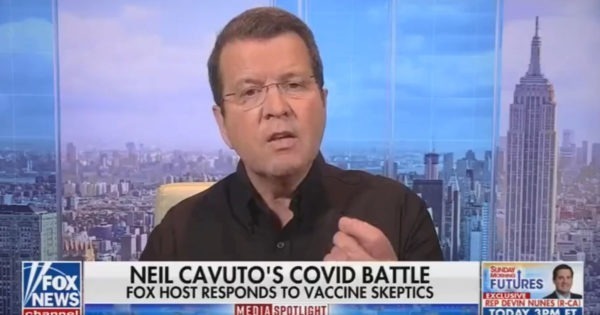 Fox Business television host Neil Cavuto came out in support of vaccine mandates and begged his viewers to take the jab and “take the political speaking points and toss them for now,” after revealing his own battle with COVID. Cavuto contracted the virus in a breakthrough COVID case after being vaccinated.

“We’ve lost five million globally to this, we’ve lost nearly 800,000 in the U.S., take the political speaking points and toss them for now, I’m begging you, toss them,” Cavuto pleaded. “Think of what’s good, not only for yourself, but those around you. If you don’t want to do it for yourself, if you think it’s a pain in the ass, I get that, but think of others around you.”

“I dare say people who experience this and have seen loved ones who have been affected by this or have ever died from this are not judging the wisdom of mandates, they’re wishing they got vaccinated, and they didn’t,” Cavuto said.

Neil Cavuto begs Fox viewers to get vaccinated after breakthrough COVID-19 case: “Take the political speaking points and toss them for now, I’m begging you….If you think it’s a pain in the ass, I get that, but think of others around you.” pic.twitter.com/ywZSUpyUaL

Cavuto made headlines in November 2020 for cutting away from a briefing by the Trump Campaign from the White House because he could not watch it “in good countenance”:

“Whoa, whoa, I think we need to be very clear, she’s charging the other side of welcoming fraud and welcoming illegal voting,” Cavuto said as the network cut from the briefing.

“Unless she has more details to back that up, I can’t in good countenance continue showing you this. I want to make sure – maybe they do have something to back that up – but that’s an explosive charge to make, that the other side is effectively rigging and cheating. If she does bring proof of that, of course, we’ll take you back. So far, she had started saying right at the outset, ‘welcoming fraud, welcoming illegal voting.’ Not so fast,” Cavuto said cutting to a commercial break.

In other news...
Studies show how police should conduct interrogations
Chad Wolf: Biden needs to be focused on border crisis
As crime soars, Biden tells CNN audience he has no problem with cops, firefighters, EMS g...
Top Oil Exporter Saudi Arabia Targets Net Zero Emissions by 2060
This Woman Took A Selfie And IMMEDIATELY Took It Down After Seeing One Small Detail!
COVID Has Become The New Religion And Adherents Must Receive The Sacrament Of Vaccination...
0 Comments
Inline Feedbacks
View all comments