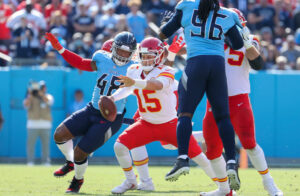 Mahomes needed assistance off the field following the hit in the second half of Sunday’s game but was seen walking on his own after being evaluated in the medical tent a short time later.

The Chiefs QB was getting wrapped up in the pocket when he was hit by a Titans’ defender as he attempted to make a throw. Watch below:

Stepping in for Mahomes was 14th-year quarterback Chad Henne, who enters his fourth season with the Chiefs in 2021.

Henne made his first-career postseason appearance in the AFC Divisional Round against the Cleveland Browns in January, where he completed 6-of-8 passes for 66 yards and added 12 rushing yards to help the Chiefs advance to the AFC Championship Game for the third-straight year.

The Concussion Protocol is reviewed each year — more information about the protocol and return-to-play can be read here.

Check back with OutKick for updates.

In other news...
Mainstream news media ignores that suspect in vicious rape was an illegal immigrant
Julie Kelly Exposes the Case of a January 6 Prisoner Who Was Denied Serious Medical Care
There Are Many Reasons Why Facebook Wants To Change Its Name
SPOOKY: TikTok Video Shows ‘Ghost’ Removing Dog’s Collar
What Else Can You Call It? Joe Biden’s War on America …
DeSantis Goes NUCLEAR: Calls For Fauci To Be Fired For Torturing Puppies
0 Comments
Inline Feedbacks
View all comments