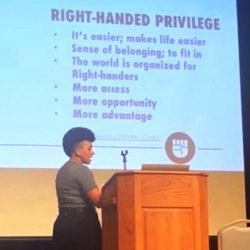 Evidently, the world has another matter of birth that is allegedly systemically discriminatory and if you are right-handed you are “privileged” and an “oppressor.”

Using one’s right hand as the primary mode of grappling objects “makes life easier” and gives one more “opportunity” and “advantage,” according to a presentation at the University of North Carolina at Chapel Hill.

The presentation also said right-handed people also have a sounder “sense of belonging” in the world.

The lecture, which was part of training from the school’s Office of Fraternity & Sorority Life, took place Monday and garnered more than 2,600 “likes” on a popular Twitter account.

The speaker series is nonacademic programming, and UNC-Chapel Hill does not mandate attendance.

Why This Is Important

Insisting that someone has “privilege” and “advantage” because they are left- or right-handed is to politicize and agendize genetics. It is beyond ridiculous and our colleges and universities must be forced back into a land of critical thinking and reason by expunging this kind of divisive nonsense from their campuses.

Rational people armed with common sense must make a decision to claw back our society from the abyss of absurdity. We desperately need to move beyond the point where everything is a grievance; where everything serves as a divisive issue.

Insanity like “right-handed privilege” is the bubblegum for the mind that serves no purpose but to divide and compartmentalize our society so that it can be more easily manipulated; led by the nose by opportunistic charlatans like those who put on mindless presentations such as this.

The alumni of the University of North Carolina at Chapel Hill should be outraged and nauseated that this was even offered on their campus. They really should make their voices heard and demand not only the termination of those responsible for this stupidity but a reprimand of the college president and dean for even considering such a non-academic exercise on campus.

Enough is enough. If we are going to have neverending “wars” on things, let’s add both a “war on stupidity” and a “war on wokeness” to the mix.

Click this link for the original source of this article.
Author: Frank Salvato

In other news...
COVID CASES ARE HIGHEST IN TOWN WHERE 99.7% ARE VACCINATED. WORKING AS PLANNED IT WOULD S...
10 Current Trends of Operation Coronavirus as of October 2021
CONGRESS: Assistant To House Sergeant At Arms Arrested, Charged With Possessing Child Por...
Something Has Changed – What Is Wrong With Nancy Pelosi?
Mayoral Campaign Headquarters Vandalized in Pittsburgh
Parents sue DOJ over memo urging FBI to investigate threats against school boards.
0 Comments
Inline Feedbacks
View all comments