From Lease To Own: Marines Get Two MQ-9 Reapers Of Their Own 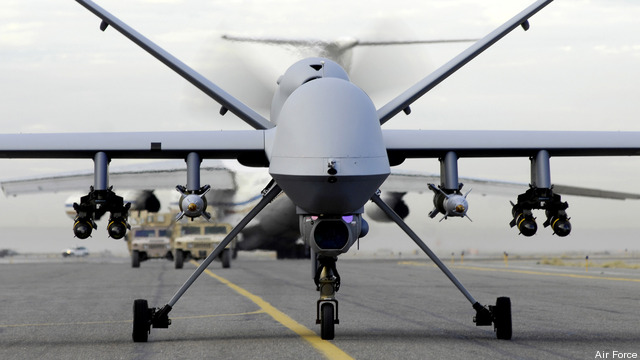 WASHINGTON: The Marine Corps has taken possession of two MQ-9A Reapers that it was previously leasing from General Atomics ASI, the company announced Wednesday, an important step in advancing the service’s No. 2 acquisition priority.

“The two aircraft have been operated by the USMC since 2018 under a company owned/company operated (COCO) lease agreement in support of an urgent operational need,” according to the General Atomics statement, which said the transfer took place on Oct. 15. “The Reapers represent the first increment of the Marine Air-Ground Task Force (MAGTF) Unmanned Aircraft System (UAS) Expeditionary (MUX) Program of Record (POR).”

MUX is the Marine Corps’ program of record to deliver a family of unmanned aerial systems. Originally envisioned as a single Group 5 UAS with an extensive suite of capabilities to meet up to seven different mission sets, the Marine Corps last year determined a single aircraft would be too expensive and impractical for their requirements. That prompted a course correction to make MUX a family of systems.

The military categorizes drones by size using “groups.” Group 5 aircraft are the largest and rival full-scale helicopters in size and weight. The Marine Corps plans to use MQ-9A as the basis for the Group 5 UAS that will be part of the MUX program.

“The MUX POR will include an additional 16 new MQ-9As, which the Marine Corps will begin procuring in 2022 to support an early operational capability in 2023 and initial operating capability in the U.S. Indo-Pacific Command (INDOPACOM) by 2025,” according to General Atomics.

Taking possession of the MQ-9As, rather than leasing them from GA, will provide two benefits to the service. The first is the ability to start modifying the aircraft to better fit the Marine Corps’ purposes. Historically, MQ-9A has been a favorite drone of the Air Force, but has seen only limited use from the Marine Corps.

The second benefit is expanding the range of missions the MQ-9A will be able to complete. Federal law limits what missions a contractor-controlled drone may execute, particularly in terms of combat missions.

“The Marine Corps leveraged the leased aircraft to better understand and articulate the needs of the MUX program, while simultaneously supporting the forward-deployed warfighter,” said GA-ASI President David R. Alexander. “It was a great example of how a customer can ‘try before you buy’ our aircraft. Now they’ve seen firsthand how a persistent ISR platform, like the MQ-9A, can support the Marine Corps’ need for long-range sensing in the Pacific as a part of the Commandant’s Force Design Initiative.”

RELATED: What Is The King Stallion, The Marine Corps’ Heavy-Lift Helo?

The Marine Corps is also refers to MUX’s Group 5 UAS as “MUX MALE,” or the medium-altitude, long-endurance drone. The missions it will prioritize include airborne communications and data relay; airborne early warning; intelligence, surveillance, reconnaissance and electronic warfare, according to Navy budget justification documents.

What is less clear from the budget documents is which UAS will make up the other parts of the MUX family of systems. Breaking Defense has reached out to the Marine Corps for comment on if any other pre-existing drones have been selected for inclusion.

In other news...
Rioters Demolish City,$500,000 in Damage as New Bill Forces Police to Stand by and Watch
The Unholy Trinity of Social Control: Covid, Climate Change and CRT
A Liberal School Is Cancelling ALL HOLIDAYS For An Absolutely Insane Reason!
Christian Employers Sue Biden Administration Over Rule That Would Force Them To Pay For S...
Jack Dorsey Shades Zuckerberg’s Facebook MetaVerse: ‘Central Intelligence Corporation’
Radio Titan Dennis Prager ‘Wanted’ to Expose Himself to Get Natural Immunity
0 Comments
Inline Feedbacks
View all comments