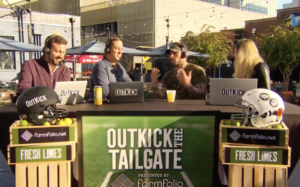 “You’ve never seen a dog beat a gator … unless it’s in football.”

The quote of the day goes to country singer Michael Ray, joining the OutKick The Tailgate crew Saturday morning to talk why he loves the atmosphere of college football, notably the Gators down in Gainesville.

Recapping their narrow 49-42 loss against LSU, Ray shared his heightened hopes of pulling off the comeback effort once AR-15 hit the field.

He also discussed what makes the college football scene unlike anything in sports.

“What I love about college football and college sports in general is that pride … when you go to those college towns and play those college bars they bring that energy to those bars. They have pride that you’re coming to their town.

“One thing about Gainesville and UF, it’s all about the people. It’s the energy of that school, there’s something about being in that swamp, and just like any other college, you’ve got that pride and colors. … Gainesville isn’t Athens or Knoxville, but it has its good spots man.”

Join Clay Travis and OutKick The Tailgate, set to follow the college football season throughout the fall. Become an OutKick VIP member to get more content with Clay.

In other news...
WATCH: Jill Stops Dementia Joe from Trying to Talk into Mic While Music Blasts
ARMS RACE IS HEATING UP BETWEEN THE U.S. and CHINA
The OBiden Regime Will Unite America Like Never Before
White House Knew About Letter That Compared Parents to Domestic Terrorists
On St Louis’ Giant KLJY: “Gun Control Myths”
Austrian Chancellor Alexander Schallenberg Tells His Unvaccinated Citizens To Prepare To ...
0 Comments
Inline Feedbacks
View all comments