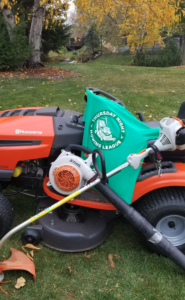 There’s a major problem brewing here in NW Ohio: the damn trees aren’t changing colors. Sure, there’s a random red tree here or there, but at the current pace we’re on, there’s going to be a major issue in November with raking leaves while freezing my balls off while the early college football games are on.

Now, I know Indy Daryl is Mr. ‘Do Hard Things’ and I started buying what he’s selling, but if there’s one thing I dread, it’s the whole mowing leaves on November 30 thing. I’m already committed to tailgating at the Ohio State-UM game on November 27, so that day is out and it’s Steelers-Bengals on November 28.

Exactly. I’m caught in a pickle here, and the damn leaves on my trees are as green as Keith in Arizona’s grass.

Dare I say I’m considering paying for a lawn service to handle leaves this year? It’s October 22 and we haven’t even sniffed a frost. Sunday morning, the low is supposed to hit 39 and then jump right back up into the upper 40s before settling into the mid-40s after Halloween.

Based on where I live and what my trusted weather guy is saying about peak color, my trees should be ready to drop around November 14, but I have this Chinese maple thing that some tree expert claimed was a cherished tree that typically won’t drop until Thanksgiving.

Freezing my ass off in early December doing leaves is starting to sound less than desirable.

• No, I didn’t mow last night. It rained like crazy Thursday morning, the winds picked up (you might’ve noticed those W35 winds during the Browns game) and I was toast. The ground wasn’t ideal and as you guys know this time of year it doesn’t make sense to destroy the turf. Conditions are much better today as the sun is supposed to be out for a few hours before we go into a cloudy weekend.

• I’m curious if any of you have experience with an electric mower. Multiple people have sent me messages about Gov. Newsom’s planned ban on gas-powered mowers and I’m just now getting around to the topic.

I’m now pro-battery-powered leaf blowers and trimmers thanks to the influence of neighborhood guys who swore by them. I get that some of you have serious amounts of ground to cover and jet fuel trimmers is the way to go. I still have a gas-powered leaf blower for the fall because there’s zero chance the battery blower is putting a dent in the leaves.

The whole battery mower thing just freaks me out. Will it have enough juice to get through the shag carpet turf in May? Someone out there has one of these things. Give me an honest review on your experience:

• Sean C. in Granger, IN had to take a DNP last night:

Well, it was bound to happen. It’s not unexpected, but it’s always disappointing once we get here. That first cold, constantly misting rain under a full overcast day. The weather app said 52 degrees, but it felt more like 35.

Another sign that the summer was in our rearview mirror was that I turned on SiriusXM channel 70 a couple weeks ago and Yacht Rock was replaced by Billy Joel. It was like back in the day when my favorite pop radio station turned into Oldies overnight. Don’t get me wrong, I can get into some classic Joel, but I turned it on under a run of 80’s Doo Wop Joel. I think I would have rather heard Horatio Sanz’s “Uptown Girl” cover band from the movie Step Brothers.

That’s two washouts in a row for me on Thursday.

This has been a weird fall. The weather has stayed seasonable warm deep into October. The leaves have barely started turning, which has made it seem like Halloween is sneaking up on us. The neighborhood doesn’t seem as decorative as in years past. I wonder if it’s just because it doesn’t feel like the end of October yet.

The grass isn’t growing as fast anymore, but it does look nice and thick still. (No pic since I got home after dark today). I know I’ve got one or two mows left, the question will be if the weather cooperates enough to get it in on a Thursday. No matter what, after November 7th, the end of daylight savings time will make weekday yard work impossible after a work day. The leaves will have to be raked on the weekend for sure. I hope Clay is using his higher profile to push his “year-long” daylight savings time proposal.

I’ll send a mowing report the next time I get a chance to get a mow in.

Had to miss the #TNML this week. Took my wife and some family to the #CBJ hockey game for her birthday. Was going to mow in the afternoon before we left, but rain ended that idea. Gonna have to mow this afternoon but we are ready to finish strong next Thursday.

• Ok, let’s look at the schedule here. One more week left. One more mow. One more time to lace up the grass-stained running shoes that you never used for running. One more time yanking that rope in the 2021 season.

At the beginning of 2021, I didn’t know a single person in this league. None of you. I wouldn’t have known Indy Daryl from the Hornitos liquor rep that’s badgering me for coverage.

But here we are on the verge of the greatest mowing season in Internet history. Let’s finish strong and thank our sponsors. One more go-’round. I’ll see you guys next week.

Indy Daryl got a mow in as we close in on the end of the season:

Today might have been one of the best Thursdays I have had in a long time. This isn’t to say that some weeks past haven’t been awesome. But today. Today I had a full productive day of work for my employer where I got to use my skills as a nurse and a tech guy. I got a great early mow in. I got to hang out with my wife on the new deck. Leftovers were delicious (can we talk about how delicious they are?!?). And to cap it all off my best friend of 17 years, whose wife is battling breast cancer, came over for the Broncos game. I don’t even care that they are going to lose, it was just so great to see and hang out with him (#moonmanisdelicious).

Thanks for your column today! Me and Mrs Do Hard Things loved your take on soccer or any other kid sport (she laughed out loud). We were both super sad about my daughter losing in a soccer penalty situation for the second straight year and also glad that her season didn’t continue for much longer. We love our kids. Our life. And how we get to participate in our community. But man kids’ sports can be all-consuming. We don’t love that life and have no interest in it.

Keep doing what you are doing! Screencaps is amazing and I look forward to it every day. Enjoy the beautiful new tree-changing colors and an even better picture of the yard and crazy garden.

It was another solid night of action here in central Tennessee. A brief afternoon rain shower threatened to shut things down, but it passed quickly enough for the sun to work it’s magic. Not much to report on the yard front, but, in tragic news, I’d like to report the passing of pair of mowing shoes. These bad boys have been around for years and years, relegated to yard-only status for the last several, and after multiple super glue saves, they have finally kicked the bucket. They say all dogs go to heaven, so I’m hopeful loyal mowing kicks have acres of green grass to tackle on the other side. Anyways, cheers to a strong season finish.

Keith W. just had to brag about his mowing season just starting to hit its stride…SMH, Keith!

Out here in AZ I don’t know anything about preparing for winter, so TNML will continue for me. The winter lawn I prepped for and seeded a couple weeks ago just had its first cut tonight. This rye will thicken a bit over the next month and be so green and so soft (much more so than the bermuda that grows over the summer). As you guys all wind down the season and head to the garages and basements for the winter, I’ll keep mowing on and actually relax outside more. I enjoyed all of the TNML content this year – I’m highly envious of so many of the yards and lawns and set ups (and different parts of the country) you’ve highlighted all year. Great work to all that contributed. Thanks!

Kurtis J. in NW Ohio is back after what I feel has been a two-week layoff:

It was one of those nights where you just have to get the job done. Even with strapping on the mowing shoes immediately after getting home from work it didn’t leave much time to mess around. Each step and turn was thoroughly enjoyable, but mowing with a purpose was the theme for the night. After the attached picture was taken darkness came on fast and it was hard to see only 10-15 minutes later. And with the cloudy skies not allowing the Harvest Moon to offer illumination it was good to get done in time.

Dave in RI took advantage of his schedule to get in one of those daytime mows that make me jealous. I don’t think Clay would care if I got a quick mow in as part of my TNML duties, but then you add school pickup duties to the mix and my day is all out of whack.

Took flex-time advantage of a late travel night coming back from a business trip to DC area (nice to be traveling some again) and got in a “day game” mow this morning…Fall is definitely in the air as the leaves drop more and more every day. Been a great year for our lawn (looks/feels like a shag carpet right now) and should only get better for next year.

As usual, couldn’t do it without the trusty #husqvarna, #echo, and #buschlight team behind me.

In other news...
Dumbest Tweet of the Year?
How remote working is threatened by double taxation
10 reasons you should reject the transgender ideology | Liz Wheeler LIVE
CNBC Host Balks at the Idea of Vaccine Mandates for Kids after Being Asked on the Spot, ‘...
Germans distrust official Corona figures, fear a health dictatorship
Why I Hate 'Democracy' | Wilkow | Ep 259
0 Comments
Inline Feedbacks
View all comments