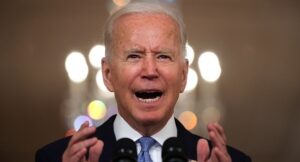 Like walking up the steps of Air Force One, President Joe Biden’s approval ratings have taken a hard plunge.

Since the start of his presidency, Biden’s approval ratings dropped from 56 percent to 44.7 percent, says a Gallop poll, surveying Americans at the start of October 2021.

According to the poll’s data and per the Fox News report, the 11.3 percent decline between Q1 and Q3 of 2021 has been the sharpest recorded drop in approval rating for a president since the second World World.

Biden’s lack of impact in policy, aim for more federal spending, lack of connection with current events and international embarrassments have been at the crux of criticism for No. 46.

Since his inauguration in January, the conversation on COVID has also grown increasingly hostile due to vaccine passports, supported by the Biden White House.

Americans are taking home less money, while spending more on commodities thanks to Biden-era inflation and supply chain deficiencies. Biden was also at the forefront of the botched strategy out of Kabul that cost 13 U.S. servicemembers their lives, encompassing the administration’s aptitude with leading the nation.

Additionally, a lack of address for the overwhelmed Texas border, permitting entry for thousands of immigrants, and zero control over China’s increased threats has give Biden an early lead for the title of W.O.A.T. U.S. President.

Wokest or Worst Of All Time, take your pick.