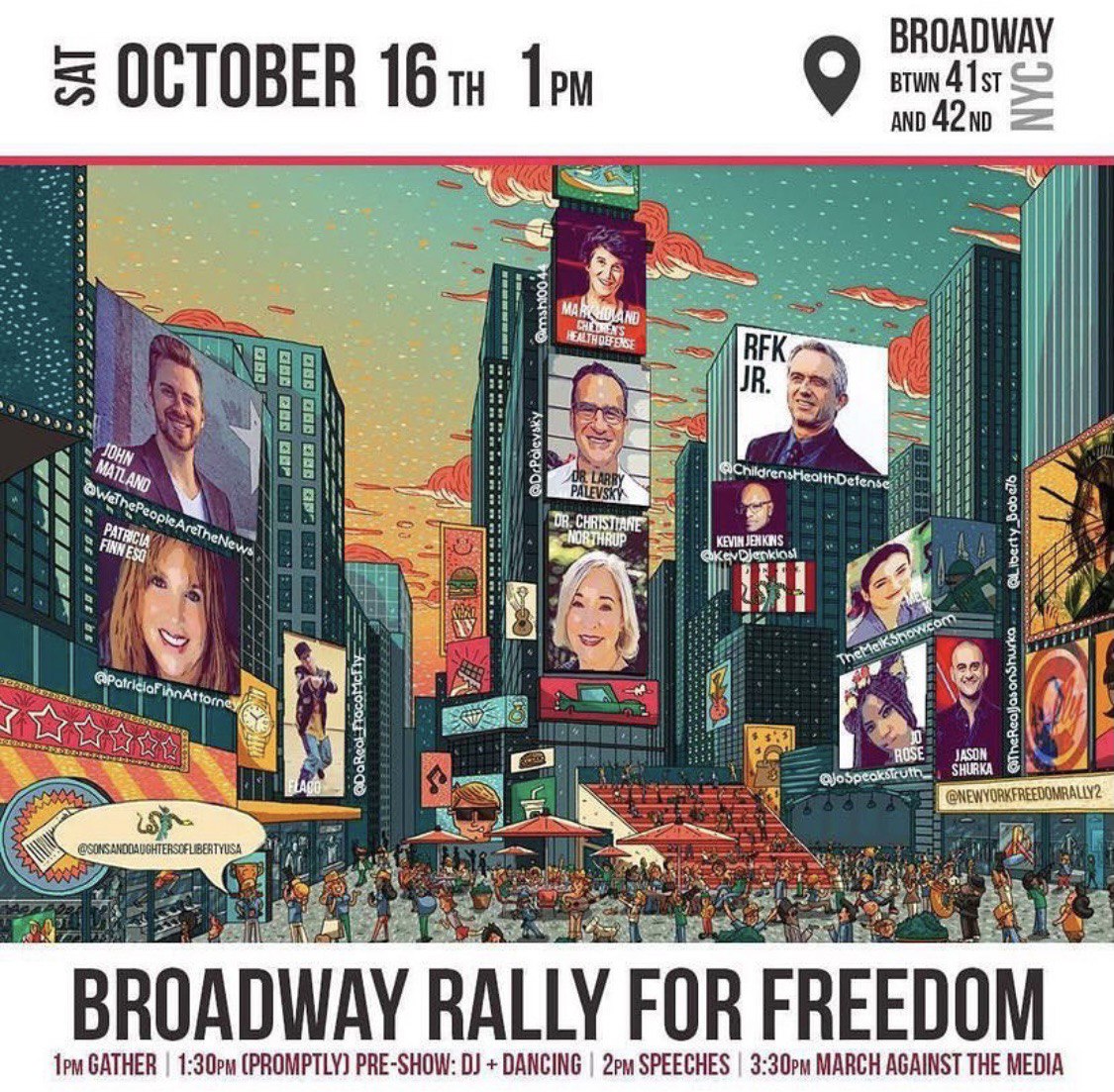 Oct 16, 2021. Another Rally for Freedom of Choice opposing vaccine mandates gathered in Times Square. It began at 1 pm, with speakers at 2 pm, followed by a media march at 3:30 to the NY Times and CNN HQ.

Climate change. The Great Reset. Build Back Better. These are all just excuses for bringing about Global Communism. (Twitter)

Flickr slide show: A large, diverse and enthusiastic crowd had already gathered by 1:30. “Say NO to vaccine mandates” was the issue across party lines. Dancers performed. The National Anthem was sung followed by a young, black woman who sang a lovely His Eye is On the Sparrow. Then two speakers from the Children’s Health Defense, Mary Holland and Robt F. Kennedy Jr., who was the main speaker.The crowd showered RFK JR with thank yous and selfies, before and even as he tried to leave. 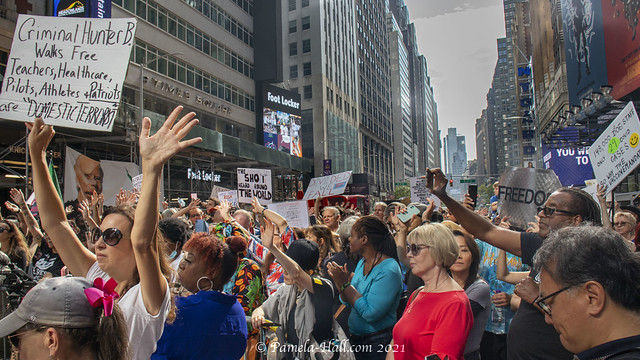 There is no PANDEMIC exception to the U.S.Constitution or the Bill of Rights.  (Even though pandemics during Revolutionary War,  small pox epidemic and the next summer, malaria in Virginia) : No Pandemic Exception.

They got rid of Property Rights.
Closed every business in this country for a year.
Constitution says you must have Due Process (a Public Hearing) and pay just  compensation.

They got rid of Freedom of Religion.
Closed churches for a year with no science behind it
(But, Fauci kept liquor stores open).

Part 1 (Kennedy con’t)  Censorship – Facebook. Instagram. (They shut down) any statement that departs from official government pronouncements or claims from pharmaceutical companies.

James Madison- re 1st Amendment- all the other rights depend of it.

The first amendment is a problem for them. They no longer believe people can be trusted. “We can no longer trust the people. We have to protect them from dangerous thoughts, from dangerous misinformation. We have to LIE to them. (It’s) the only way to continue to have peace.” That is the end of democracy – you have lost faith it. No longer call yourself the Democratic Party.

Jury Trials and the U.S. Constitution. They got rid of jury trials. Cannot sue for injury – no matter how toxic the ingredient. No American shall be deprived of the right of a trial.   Jury of their peers. What if someone cripples you for life. What about due process of law.

Regulatory agencies pass laws. Can’t get rid of them. No accountability. Can’t vote them out. Tyrants.

Masking. Lock-downs. Social-Distancing. (paraphrasing) Did not follow any of the required methods of notification and public response, considering the impact. Nobody ever made a citation. Public hearings. (describes Fauci’s)  diktats of a technocrat. Do what you are told and keep your mouth shut. They ordered us to behave.

Everyone in this crowd has a feeling of discomfort re what is happening to them. What happened to our country. How did all these countries in the world, in one lock-step move, pivot and end democracy. Impose authoritarian control all at once. All over the globe. How did that happen.

[a word I don’t understand] that is a table-top pandemic simulation that was put on by Bill Gates WITH the CIA  in Oct 2019. Present were social media titans, Bloomberg News. Major power sectors of our country were participating. In October…

September is probably when the viruses escaped Wuhan, according to internet chatter. So a month later Covid is already circulating. They were practicing a drill: what will they do if a Covid pandemic. They did not practice how to make people well. To build stronger immune systems. How to protect the constitution during a pandemic. NO. What they were practicing was how to use the pandemic as an excuse to clamp down totalitarian control and eliminate the Bill Of Rights.

(excerpted text Part 3) How do we make money on a pandemic. (That’s what they’re practicing)

Researching the CIA (re a $1200 manual that is almost impossible to get):

How to go into indigenous countries/impose foreign centralized control … by the CIA. Destroy local economy. destroy social and family relationships. erode institutions. pump up fear. scapegoat. all the alchemies of totalitarianism. Once they have sown total chaos, come in with centralized control and take over.

CIA for many years did research and how to control individual and mass behavior. How to impose mass control on a population. (150 universities in this country were made to be apart of this study for mass control) most famous in mid-60s was at Yale (home of the CIA). Cross-section of the country and a man in a white lab coat (claiming to be a doctor) 67% did what they were told. Even though they were in tears. Violating their conscience. They found that authority figures control values and conscience.

(Like) Fauci. The guy in the white lab coat. Never treated a patient. Telling us to violate our conscience. 67 % co-operated. BUT 33% REFUSED. (CHEERS- Freedom. Freedom.)

600 people on the West Coast said they are going to lose their jobs. He (Kennedy)  said you really should think about that. They said no, we’re going to die on this hill.

A generation of Americans in 1776 felt  it was better to be dead then to lose your freedoms. And because of them we have the United States Constitution, so we could enjoy the Bill of Rights that the 67% have given away for free over the last year.

We need to go get it back.

Next VIDEO (6:31) excerpted clips of attorney,  Mary Holland (Children’s Health Defense) as “We Will Not Comply” rang through the streets.

“Once I learned about the extreme liability protection that industry and healthcare providers enjoy, and the suppression of accurate science and information about vaccine risks and injury, I understood the need for immediate, radical systemic change. I have been devoted to that change ever since.” (M.Holland at Children’s Health Defense)

“The reason that Hydroxychloroquine and other therapeutics were blocked is because if something worked, they couldn’t give emergency use approval to the vaccines. It all makes sense now.” [Twitter]

Re the Black/African flag seen in the crowd created by artist David Hammons.  (The African-American flag) “…  a massive political statement for the African-American community, inspired by two contrasting symbols: the U.S flag and the Pan-African flag, the two flags merged to expose the feeble history behind the flag of the United States and the mixed messages it conveys about their history.”

A political statement flag at a ‘No Vaccine Mandate’ Rally seems to represent separatism, instead of unification of purpose. 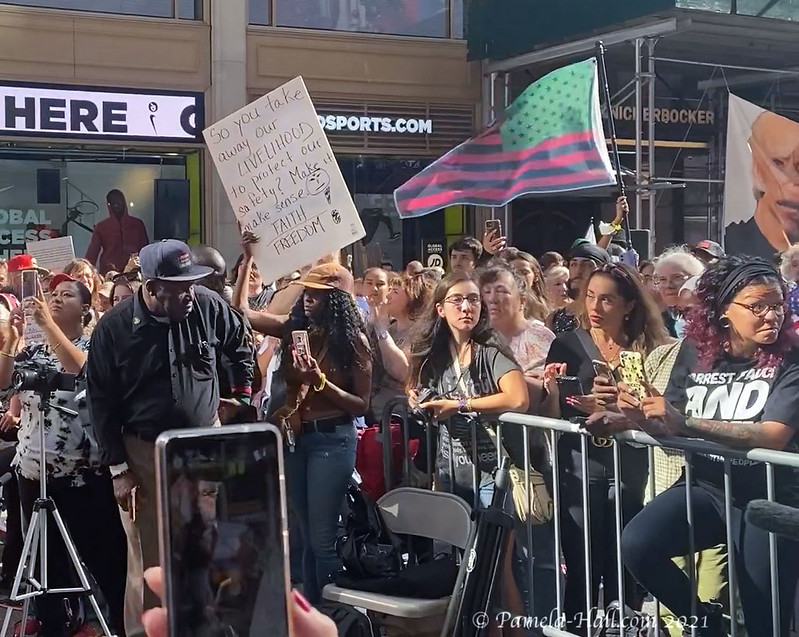 The Media March to the NY Times and CNN HQ at 3:30 was covered by Scootercaster:

As the challenges roll on:

Florida Gov. Ron DeSantis on Oct. 21 called for a special legislative session to consider bills countering vaccine and mask mandates. The move follows a series of CCP virus vaccine mandates imposed by the administration of President Joe Biden. This does not sit well with the Florida Governor, and he has “had enough” of federal interference into state business … [Epoch Times]

The U.S. judiciary system is doing a poor job of stopping, blocking, and delaying COVID-19 vaccine coercion, but workers who have toiled throughout the pandemic are using their voices to pressure companies into laying off of forcing the jab.

The courts’ lack of vigor for reinforcing personal freedom has resulted in the firing of many people, but workers are determined to fight back. Employees all across the nation have protested, and some of their efforts are being rewarded.

“A generation of Americans in 1776 felt  it was better to be dead then to lose your freedoms. And because of them we have the United States Constitution, so we could enjoy the Bill of Rights that the 67% have given away for free over the last year. We need to go get it back.” (RFK Jr)

[Where indicated, pictures and videos property of Pamela Hall-VSB]

Click this link for the original source of this article.
Author: Pamela Hall

In other news...
Tell Beto O'Rourke I Challenge Him To A Debate On The Second Amendment
'The Five' react to Biden's plummeting approval rating
Artifact’s Discovery Suggests Vikings Reached U.S. Before Christopher Columbus
Proof That Fibromyalgia is Real
Why are thousands of postal workers still unvaxxed?
Liberals Won’t Be Happy Over What China Just Did
0 Comments
Inline Feedbacks
View all comments