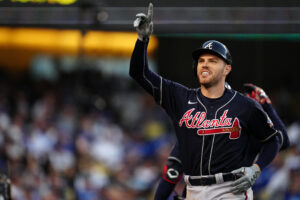 All odds in this article come from our partner, FanDuel Sportsbook, where new users can win $150 on just a $5 bet by picking the winner of the Houston Texans and Arizona Cardinals game on Sunday (10/24). That represents an incredible 30-1 odds boost. Click here to claim this offer now.

We went 2-0 last night in baseball and are now down to just one game on the schedule for today. The Dodgers are facing elimination at the hands of the Atlanta Braves. Let’s see what we can bet on for today’s game.

Let’s start with what we know. We know that Max Fried is pitching tonight for the Braves. The lefty went six innings against the Dodgers in Game 1 of the series. He allowed just two earned runs, but there was a lot of traffic against him – eight hits allowed. He didn’t walk anyone at least, but that still is cause for a bit of concern that he wasn’t really keeping the Dodgers off base. He was essentially allowing one hit per inning and allowed three extra-base hits. This means literally nothing, but the Braves have won 12 of the last 13 games started by Fried since August. Their one loss was to the Dodgers. Fried’s splits give no room for concern on the game.

What we don’t know, is who the Dodgers will start. The rumor is that the starter, or opener, or person who pitches first, is going to be Corey Knebel. He has already thrown twice against the Braves. One full inning appearance, and one out recorded in his most recent outing. In both, he allowed one hit and one earned run. This may amount to another bullpen game after a few of their arms got some rest yesterday. If Knebel can go three scoreless innings today, I think the Dodgers can win, but I’d say the chances of that are less than 50%. The Braves are up three games to one, they’ve looked like the better team in just about all four games. Atlanta has an actual starter who is rested. I’m playing the Braves to win this game at +124.

I’d never advise this, but Freddie Freeman getting one hit tonight is -260. He’s 2-for-5 against Knebel in his career. Freeman has had multiple hits in two straight games. Then again, he’s also had two games that he has had zero hits. If you’re interested in it, Freeman for 2+ hits is +210.

In other news...
Live Replay: House Republican leaders speak to press
THIS IS GRAPHENE OXIDE’S REACTION TO 5G RADIO WAVES.
In a New Survey, Victims of Philadelphia’s Forfeiture Racket Highlight the Hazards of Giv...
Ivermectin: The Elephant in the Room
If Donald Trump chooses not to run in 2024, who takes the reins for the GOP? | Spicer &am...
WATCH: 'Star Trek' actor William Shatner launched into space
0 Comments
Inline Feedbacks
View all comments