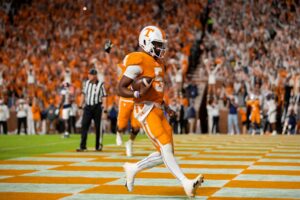 Head coach Josh Heupel addressed the status of Tennessee starting quarterback Hendon Hooker, along with a few others, on Thursday.

After suffering an injury last weekend against Ole Miss, Hooker has been day to day, according to Heupel. Luckily for Tennessee, Hooker has been able to get some work in during practice this week, though how much is unknown. Heupel made it clear that Friday’s practice will help the trainers and staff make a decision about whether he starts this weekend against the Crimson Tide.

Heupel was also asked about the other quarterbacks and whether they have taken reps this week, in case they need to replace Hooker this weekend.

“The other guys have gotten some work,” Heupel added. “Medically, we’ll make a determination where all those guys are at here when we get through tomorrow’s practice. At the end of the day, our training staff is a decision-maker as far as, are guys ready to play and compete or are they not.”

The starting quarterback isn’t the only position where the Vols are hurting. The running back group and offensive line are dealing with injuries too. Heupel addressed both of those groups on Wednesday night, during Vol Calls.

“RB wise, we’re continuing to get healthy, we’ll be close to a full stable, if not a full stable of RBs when we get down to Tuscaloosa,” Heupel said.

On the offensive line, Heupel discussed getting Cooper Mays back at center, saying, “I think Cooper is close to being back, Cade is day to day, and we’ll find out more later in week.”

The Vols could desperately use Cooper Mays, since that move would allow Jerome Carvin to move back to guard, which could make the offensive line even more stable. This would definitely help, if Cade Mays cannot play.

It’s also worth remembering that Tennessee has an open date next weekend, which will also help some of these players get healthier.

So, Tennessee is hoping to get back a number of players on Saturday, especially the starting quarterback. Against Alabama, they’ll need all the help they can get.

Click this link for the original source of this article.
Author: Trey Wallace