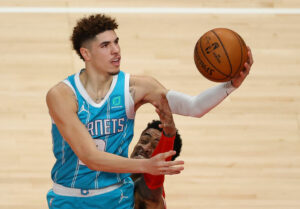 The “Big Three” is all the rage in the current NBA but don’t expect to see LaMelo Ball become a member of one.

The second-year Hornets guard recently sat down with The Athletic’s Joe Vardon and showed the whole world that he’s a throwback in the same vein of Michael Jordan, Karl Malone, Kobe Bryant and the many greats that came before him. While his play on the court is not yet at the level of those Hall of Famers, his mentality is.

“I feel like I still kind of got that mentality that they had back in the day,” Ball said. “Even with the switching teams and stuff, they never used to do that. You go to one team, you stay there.”

That’s remarkable perspective for the 20-year-old, who has grown up in a time where the league has become a revolving door of players switching teams every year. Look no further than the last few offseason’s, where the Nets’ Kyrie Irving and Kevin Durant, the Clippers’ Kawhi Leonard and Paul George and the Lakers’ Russell Westbrook all found new homes. The “Big Three” has almost become a prerequisite for winning an NBA title, as teams across the league continue to put three great players together through free agency and trades.

But that’s not for Ball, who wants to bring a championship to Charlotte for the first time in franchise history.

“You supposed to just go to a team and build from there—I feel like that’s how it should be,” Ball said. “Especially when you like a high pick too, most likely going to a team that wasn’t as good, so you try to make them better. I feel like that’s the whole process right there.”

Ball is right, that’s the process. But Ball will still need the help of others to accomplish his goal. Charlotte has never been a destination for free agents to come, and most high draft picks the organization has had under Jordan as owner have not panned out. Ball is out to change the narrative, and it started with the season opener on Wednesday night.

Ball was in his bag in a 123-122 win over the Pacers, going 11-of-23 from the field, 7-of-9 from three in route to 31 points, nine boards and seven assists. Ball appears ready to take the next step into stardom after his Rookie of the Year campaign last season. Ball can only hope his great play alongside forward Gordon Hayward will translate into the first playoff nod for the Hornets since 2016.

The post Don’t Expect To Ever See LaMelo Ball On A Super Team appeared first on OutKick.

Click this link for the original source of this article.
Author: Nick Geddes