Fired For Not Being Vaxxed: Seattle Fire and Police Turn In Their Boots, Feed Homeless 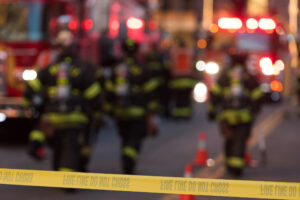 Despite the majority of Washington employees being in compliance with the COVID-19 vaccine mandate, some public employees in Seattle walked up the steps of city hall to turn in their belongings on Tuesday after being fired for not complying with the state’s vaccine mandate.

The mandate that Gov. Jay Inslee announced in August requires most state and health care workers and school employees to get vaccinated or lose their jobs, KING 5 News reports. Employees can apply for a medical or religious exemption, but there is no testing option.

By 11:59 p.m. Monday, all Seattle city employees have to be vaccinated against COVID-19, and as of Monday morning, 94% of the city’s 11,000 employees had been vaccinated, and an additional 5% had filed paperwork to be exempted from the order. The remaining 150, or about 1%, had not yet complied, the Seattle Times reports.

On Tuesday morning, the Washington State Patrol that among its more than 2,000 employees, it is losing 127 civil servants and commissioned officers because of the vaccine mandate. This includes 67 troopers, six sergeants and one captain, according to a release per KING 5 News.

Seattle firefighters and police officers that were fired for not complying with the vaccine mandate are out feeding the homeless, Katie Daviscourt reports.

KING 5 reports that as of Monday, 98% of Seattle police employees were either vaccinated or were granted exemptions and 24 employees had not submitted their paperwork. About 99% of Seattle Fire employees met the mandate with 16 people not having submitted paperwork.

Citywide, 99% of Seattle’s 11,000 employees complied with the mandate — which includes 94% of employees being vaccinated with 5% receiving exemptions — according to the mayor’s office.

The post Fired For Not Being Vaxxed: Seattle Fire and Police Turn In Their Boots, Feed Homeless appeared first on OutKick.

In other news...
Gone O! LSU Football Coach Was Fired Before He Took The Field And Beat Florida Saturday
Any more questions? Socialist pope calls George Floyd a “good Samaritan,” praises Black L...
Connected Vehicles Being Tested in Central Ohio
Satan Soldier Master Liar Trump Gets Briefly Booed By Supporters After Pushing Kill Shot ...
“Doctor’s are complicit in Crimes against Humanity” – Dr Judy Wilyman
Churches are Being Burned to the Ground, But Why?
0 Comments
Inline Feedbacks
View all comments