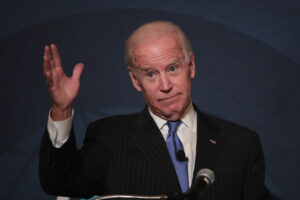 Former President of the United States Donald Trump went on The Water Cooler program to discuss the nation’s progress (or lack of) in defeating the COVID-19 pandemic.

After 20 months of shutdowns and mandates, the American people have been reluctant to follow the Biden administration’s commands: From continual mask wearing devoid of vaccination status, to receiving an indefinite number of booster shots to ensure immunity.

Trump claimed that transparency and leading by example during his time in office in 2020 helped drive a favorable sentiment toward getting vaccinated, unlike Biden’s heavy-handed approach.

Rather than enforcing these decisions upon citizens, Trump claims that a hands-off approach allowed for Americans to develop trust in the vaccine — created and kicked off through Trump’s Operation Warp Speed strategy.

“But we didn’t have this debate, there was no talk of mandates and all of the things that are happening right now, when I was there. People wanted the vaccine,” said Trump. “And it’s become a very very big, nasty and thorny issue.”

Democrats have had a bad streak with invoking confidence in the vaccine since Biden entered office. A lack of perspective on a return to normalcy and double standard applied between Dems and citizens has provided a picture of how society runs when elites are in charge.

Trump claimed that he has long championed for Americans to have full say in whether they choose to get vaccinated, especially among those with natural immunity — which boasts a 27-times higher level of protection against the virus.

Tune in to The Clay Travis & Buck Sexton Show to get more honest and insightful coverage on America, sports and politics.