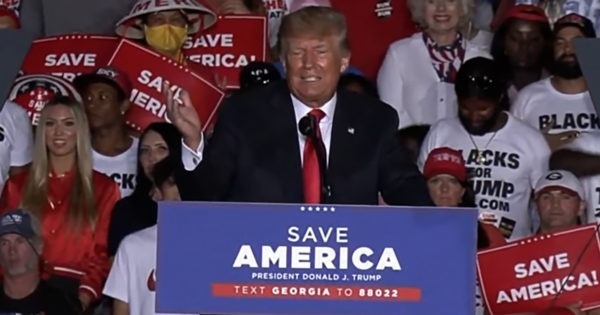 During his Georgia rally, 45th President Donald Trump briefly mocked the failed effort to legally challenge the Arizona Senate’s authority to conduct an audit of the election, and noted that Marc Elias recently left Democrat and Clinton-allied law firm Perkins Coie. Elias was the Clinton campaign’s general counsel in 2016.

Marc Elias, the Democrat-allied lawyer who was formerly the head of Perkins Coie, recently left the firm to start his own practice. This came after the firm’s efforts to stop the Arizona Senate’s forensic audit of the 2020 election in Maricopa County failed, and after their client Mark Kelly dropped his lawsuit against National File, its editor-in-chief Tom Pappert, and Senior Reporter Patrick Howley.

“They went to court, the same guy that I guess got fired. Elias. They sent in 107 lawyers to fight us.” pic.twitter.com/Fg2wbM7V59

At least one high profile attorney departed soon after to work for Elias. Henry “Hal” Brewster, who was the lawyer handling Mark Kelly’s now dismissed lawsuit against National File, announced his intention to leave for Elias’ firm on September 1. Brewster is perhaps best known for representing Cheryl Mills, the former lawyer for President Bill Clinton who was under fire as Hillary Clinton’s chief of staff during the Clinton email scandal.

Kelly sued National File after this publication located yearbook photos that appear to show Kelly dressed as genocidal dictator Adolf Hitler. As the case entered the discovery phase, the lawsuit against National File was ultimately dropped. As National published at the time:

In October of 2020, National File published photos we believe to show Mark Kelly dressed as genocidal dictator Adolf Hitler. Kelly claimed he was not depicted in the photographs, and proceeded to retain the powerful Democrat law firm Perkins Coie to sue National File in response. A lawsuit was filed against National File, Pappert, and Howley on October 26, 2020.

The head Perkins Coie lawyer representing Mark Kelly in the suit against National File was none other than Henry “Hal” Brewster, who gained national recognition while representing Hillary Clinton’s staff in the matter of her bathroom email server. The Arizona-based Perkins Coie attorney attached to the lawsuit at the time of filing is Sarah Gonski, who also challenged the legality of the Arizona Senate’s forensic audit of the 2020 election results in Maricopa County. Finally, Perkins Coie’s top lawyer is Marc Elias, who while not directly involved in the now-dismissed lawsuit against National File, is the Chair of Perkins Coie, and served as the General Counsel for Hillary Clinton’s failed 2016 presidential campaign.

Now, while facing what may be a challenging reelection campaign in 2022, Kelly has dropped this lawsuit after 10 months of litigation. In a press release, Pappert said, “The fact that Mark Kelly dropped this lawsuit proves that the sitting U.S. Senator did not want to go to trial to defend himself against claims he appeared in a photo dressed as Hitler.” He added, “Mark Kelly’s policy positions — medical tyranny, gutting the Second Amendment, militarized corporations in charge of society — are all hallmarks of totalitarian regimes. It makes sense that Kelly wanted to make this go away while he’s running for reelection.”

National File needs your help. Despite our legal victory against Mark Kelly and Perkins Coie, we still have mounting legal bills. Unlike other conservative news outlets, we have no benefactors and depend entirely on ad revenue and donations from readers like you to keep our hardened team of reporters able to eat ramen noodles and dollar tacos.