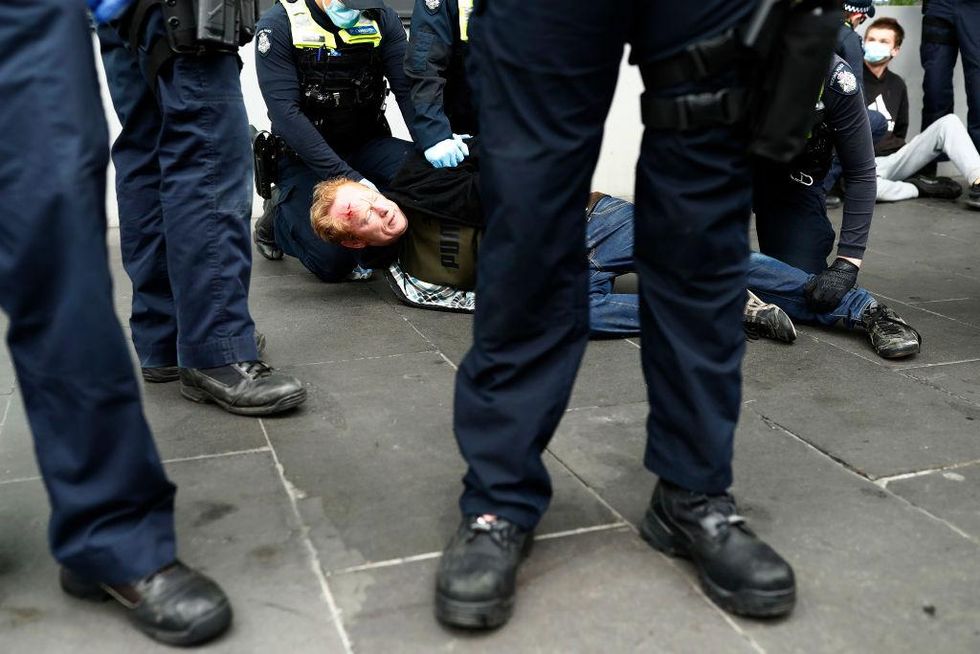 Several disturbing videos have emerged from Australia this week as people against vaccine and mask mandates clashed with police. Alarming videos show protesters railing against the mandates and lockdowns being violently confronted by police.

There were protests against lockdowns and COVID-19 vaccine mandates earlier this week in Melbourne. Authorities countered the protests with crowd control munitions, including pepper spray, rubber bullets, pepper ball rounds, and rubber ball grenades. More than 200 people were arrested on Wednesday. Journalist Rita Panahi shared footage of the crackdown of protests.

These are non-lethal pepper ball rounds. Used extensively during Melbourne protests in the past week. https://t.co/IFbkfb4RXH

There is also footage of police employing questionable tactics. One police officer appeared to use the butt of a rifle to bludgeon a man on the ground who was seemingly complying. Another video shows a cop punch and then tackle a man in the street and put his knee on the man’s neck.

Longer version of same incident posted in previous tweet from Melbourne. Note the officer in the back using his wea… https://t.co/jCdzJRZVGn

A maskless couple was arrested by a throng of police near a beach in Melbourne, Australia’s second most-populated city with 5 million residents.

Different angle of above incident. https://t.co/Tu0Qhat2Xl

In another incident, a man who was allegedly walking his dog in Melbourne was arrested for not wearing a face mask. The man claimed that he is medically exempt, but the group of officers arrested him anyway.

Victoria police questioned this man for not wearing a mask, he clearly stated he was medically exempt & was walking… https://t.co/DHib5N8ao2

Victoria Police are investigating a brutal incident where an officer walked up to a man from behind and then viciously slamed him to the ground at a Melbourne train station.

The witness who posted the video online said, “This poor guy was calm, he was just talking to the police. You can see it in the video then he gets thrown to the ground. You can hear his face hit the tiles. He was unconscious, blood and urine everywhere.”

The witness said the man was “unconscious for a while.”

Victoria Police chief commissioner Shane Patton told 3AW, “‘We’ll investigate it with an open mind and look at it to determine whether they’ve acted appropriately.”

Another viral video shows three police officers arrive at the door of an Australian man, and claim they are conducting a “welfare check.” However, the law enforcement agents asked the resident questions about participating in protests against coronavirus lockdowns and vaccine mandates.

A police officer asked if he is “planning on going” to any protests.

The officer inquired, “Are you aware of any planned protests or events that are coming up?”

The officer asked, “Are you aware of any communications circling around between people about any planned protests coming up?”

The officer questioned if the man uses any social media platform, and then asked, “Have you gone to any protest in the past?”

He asked the man, “Anything else you’d like to tell us that might help to ensure the public safety?”

The man inquired how the authorities got his address, but the officers declined to answer.