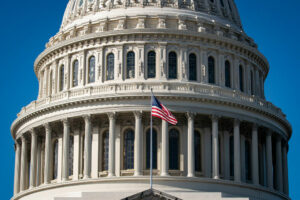 A judge ordered federal prosecutors to release more Capitol surveillance videos from Jan. 6, despite the government assertion that publicizing the clips could pose security risks for the building.

The court order undermined an obvious ploy by US Capitol Police and the US attorney’s office to restrict footage that doesn’t help the current administration politically. Democrats are trying to frame the events of January 6 as insurrection and treason, on par emotionally with actual country-altering events like 9/11. But the footage shows the truth: a few dozen people mulling around peacefully, twiddling their thumbs as if they were waiting for a tour of the building.

Was it silly and strategically disadvantageous to give leftists such a distinct visual to propagandize? Yes. But were the events even remotely similar to the shock and horror of two commercial airliners striking two of our country’s largest building, and thereby eviscerating thousands of innocent Americans in an instant? Worse, actually, if you ask a leftist, whose political fervor and disdain for all opposing viewpoints has reached religious fundamentalist proportions.

Prosecutors stuck to their guns, though, framing the release of video evidence as a threat to the Capitol and those who work there.

“This footage, when combined with other footage from nearby cameras, could be used to track individual rioters moving through the building thereby creating a visual pathway which other bad actors could use in planning their breach point and pathway for future attacks,” prosecutors wrote.

The presiding judge, however, didn’t agree, citing a lack of specificity as grounds for release.

“Hundreds of cases have arisen from the events of January 6, with new cases being brought and pending cases being resolved by plea agreement every week,” US District Chief Judge Beryl Howell wrote. “The public has an interest in understanding the conduct underlying the charges in these cases, as well as the government’s prosecutorial decision-making both in bringing criminal charges and resolving these charges by entering into plea agreements with defendants.”

The post The U.S. Attorney’s Office Wants To Keep Jan. 6 Footage Private, And It’s Obvious Why appeared first on OutKick.

Click this link for the original source of this article.
Author: TK Sanders