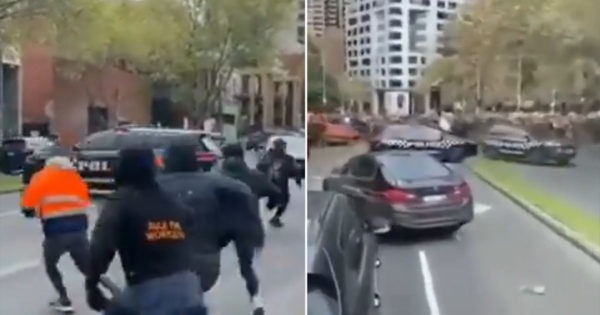 Video footage from the heated anti-lockdown protests in Australia shows a group of protesters successfully repelling the charge of governmentf riot police, with police vehicles turning and retreating from the fray after being pelted with various thrown objects. Tensions have flared at the protest after police were seen on video brutalizing unarmed civilians, including women and the elderly.

Various angles show the angry group of Australian protesters sending the riot police into a full retreat. A large segment of the protesters consist of blue-collar construction workers, many of whom have been laid off, sent home without pay, and otherwise ostracized by the Australian and provincial governments’ invasive contact tracing and vaccine passport protocols.

Andrews also said that ” it’s not gonna be safe for people who are not vaccinated to be roaming around the place spreading the virus.” As National File previously reported, tensions are high during the ongoing lockdown protests:

A remarkable situation is currently unfolding in Melbourne, Australia, where thousands upon thousands of anti-COVID tyranny protestors have taken to the streets in a grand revolt against the government. Videos surfacing online reveal major clashes between citizens and mask-wearing riot gear-clad law enforcement officers, who are struggling to curb the restless crowd seeking to restore the freedoms they once had prior to the ruthless enforcement one of the most totalitarian COVID-19 pandemic responses the world has ever seen.

The protests come shortly after the government moved to shut down the construction industry for two weeks due to opposition to vaccination mandates.

In other news...
Outkick Bets: 5 CFB Picks To Take To The Bank
Hannity: Americans deserve better than Joe Biden amid swath of crises
A.F. Branco Cartoon – A Bridge Too Far
[VIDEO] Thanks to Both The Song and The Flag, This Will Be The Best 25-Second Clip You’ll...
Supreme Court asked to reverse Colorado's attack on Christian web designer
Politico ‘Scoop’ On Biden Laptop Proves The Dangers Of ‘Disinformation’ Police
0 Comments
Inline Feedbacks
View all comments