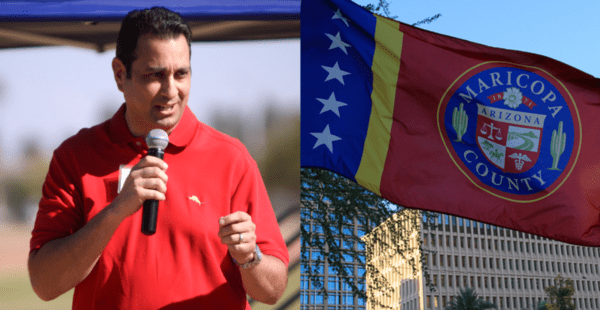 After being caught in leaked audio claiming that there was “multifaceted” voter fraud in the 2020 election, Steve Chucri has resigned his position as Maricopa County Supervisor, saying Biden won the election fairly.

Chucri, who is currently serving as Supervisor for Maricopa County’s District Two, was caught in audio published by The Gateway Pundit admitting that the partial “audit” organized by the County was “pretty bullsh*t,” and that a mass campaign of voter fraud happened during the 2020 election. As National File reported:

In audio of a phone call from January 22nd, between Chucri and Shelby Busch from election integrity group We The People AZ Alliance, the Maricopa Supervisor argued that a “multifaceted” campaign of voter fraud was conducted in Arizona. “I think it was through dead people voting,” Chucri told Busch. Busch noted her organization had been attacked by the mainstream media for pushing evidence as simply being “conspiracy and unfounded truth,” prompting Chucri to interject that “ballot harvesting” may have also taken place in the election…

[In another audio tape] Chucri even suggested that certain board members wanted to stop the full forensic audit because they were worried that such an audit could show they had actually lost. “[Bill] Gates got scared because he barely won,” Chucri said. “And [Chairman of the Board Jack Sellers] got scared because he only won by 200 votes,” he continued, describing their actions as being “self-serving.”

Following the publication of the leaked audios, Chucri swiftly announced his resignation from the Board of Supervisors for Maricopa County, blaming his resignation on the “toxicity” of the current political environment, adding that his colleagues on the Board “have every right to be both angry and disappointed” with him for the comments he made “during a very turbulent time.”

GOP @maricopacounty BOS @Steve_Chucri is resigning effective Nov. 5 due to a conversation disparaging his colleagues was recorded before the #azaudit and leaked to Gateway Pundit. pic.twitter.com/8wldECRLew

Despite the fact that he called his colleagues “self-serving,” “scared,” and gutless, he pivoted to describing them as “good, honorable and ethical men” in his resignation statement. “The picture some individuals are trying to paint about a cover up, scam and other nonsense about my colleagues and myself is simply false,” Chucri said. “There was no cover-up, the election was not stolen. Biden won,” he continued, completely conflicting with his earlier statements on ballot harvesting and dead people voting. His resignation will come into effect on November 5th.

The final results of the Maricopa audit will be available on Friday at 1PM Arizona time. “Because we have no hearing rooms it will be presented to Chairman Petersen and Senate President Fann. Gallery will be open to public,” tweted State Senator Rogers, confirming a full livestream will be available to watch. The results were initially set to be released sooner, but the process was delayed after two members of the Cyber Ninjas, including Cyber Ninjas CEO Doug Logan, caught the coronavirus.

Start working from home! Great job for students, stay-at-home moms or anyone needing an extra income… You only need a computer and a reliable internet connection… Make $90 hourly and up to $12000 a month by following site…………