COVID-positive patients in Florida, Texas, Alabama and other Southern states have learned the Biden administration is withholding life-saving medical treatment in a jaw-dropping display of federal power, a decision that is being described as raw revenge on least-vaccinated “red” states and a cruel push for more people to accept The Jab.

People who have tested positive for the virus are lining up to undergo monoclonal therapy, a treatment that injects the patient with lab-made antibodies that fight infection by mimicking the body’s natural antibodies. Along with their state governors, many of those patients learned last week, however, that supplies are being slashed to some states by the Biden administration and are likely being held back or diverted to other areas.

“Our supply is not unlimited,” Jen Psaki, the White House press secretary announced, “and we believe it should be equitable across states and across the country.” 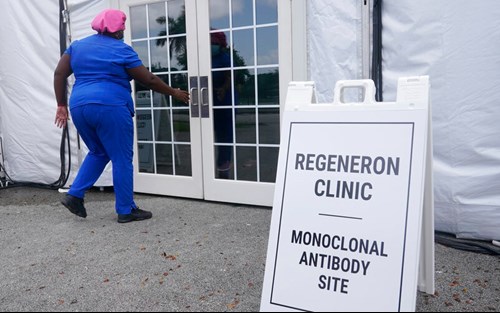 “We’re facing a massive, massive cut in monoclonal antibody treatments abruptly,” Gov. Ron DeSantis told reporters last week. “Just after the President said they would have a 50 percent increase, we’re now seeing more than a 50 percent cut for the state of Florida. So we’re going to fight like [expletive] to make sure that our folks get what they need.”

In Alabama, where the Feds are expected to cut supplies by 30%, the response from the Alabama Medical Association was more muted. “We’re calling on the federal government to help us provide more of this treatment — not less — so we can save lives and keep COVID patients out of the hospital,” the president of the AMA said in a statement.

Monoclonal treatment was largely unknown to the public just months ago, even though its promising results were reported late last year, but usage has now exploded across the U.S. in a bid to keep patients out of a hospital bed. Reportedly because of the growing demand, the U.S. Dept. of Health and Human Services announced Sept. 13 it was stepping in to oversee the national distribution of monoclonal antibodies from a single national supplier.

An announcement by the American Hospital Association, which can be read here, informed its 5,000 hospital members that HHS was taking over distribution to U.S. states due to a “significantly constrained supply” to ensure “equitable distribution of what has now become a limited resource.” 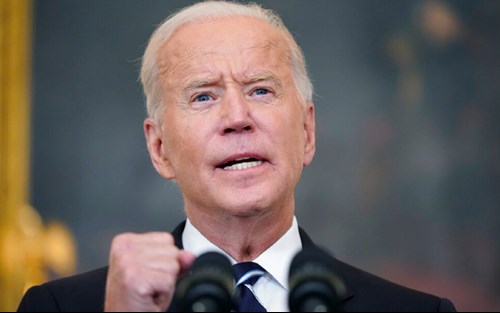 That announcement went largely unnoticed by the public at large until Sept. 16, last Thursday, when Newsmax correspondent Emerald Robinson asked Psaki why the monoclonal supplies to “red states” are being slashed.

Likely expecting a reply about vaccination rates, Robinson went on to assert approximately half of the COVID-positive patients in South Florida are fully vaccinated. So that means, she said, cutting the doses to Florida is not just affecting nonvaccinated people with the virus.

“That’s not accurate,” Psaki unhappily responded, “so let me get you the accurate information.”

Despite the denial, the press secretary then went on make two eye-opening statements. There would not be such a high demand for the monoclonal therapy if more people would get vaccinated, she said, and she then blamed seven states with low-vaccination rates for using up 70% of the monoclonal orders.

“Our supply is not unlimited,” Psaki said, “and we believe it should be equitable across states and across the country.” 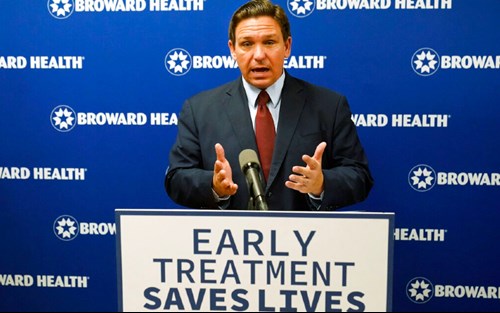 Not done with her question, however, Robinson pushed back and said there have been no reports of a lack of monoclonal supplies.

Psaki, however, repeated her statement about “equitable” supplies across the country and said Florida should not receive more shipments, for example, than Oklahoma.

That example amounts to a flimsy comparison since hard-hit Florida has 3.5 million COVID-positive cases to date, the third-highest in the country, versus 592,000 in Oklahoma that ranks 26th, national statistics show.

“What I loved about it,” Robinson later said of that exchange, “was that [Psaki] started out saying that’s not accurate and then explained why it was actually accurate.”

Reacting to the HHS announcement, Florida-based Liberty Counsel attorney Roger Gannam says what is happening is “retaliatory” punishment for Republican-led states, where the therapy is working but vaccination rates are lagging in some of them.

“By reducing the availability of this good treatment, an FDA-approved treatment that’s shown a lot of success, it will necessarily cause more people to think about vaccination. I think that’s what’s behind this move,” he tells American Family News. “And it’s also, I think, calculated to punish the governors who have been doing well with the antibody treatment.”

Gov. DeSantis, who is seen as a likely GOP candidate for president in 2024, emerged an early adopter of the monoclonal treatments, Gannam points out, and the governor made sure it was available across the state.

According to The Miami Herald, Gov. DeSantis oversaw a statewide effort in August to open 25 free treatment sites across Florida, where approximately 90,000 people have been treated so far and where hospitalizations have been declining daily for 24 days.

“We think having the availability of the early treatment,” DeSantis said, “has made a big difference.”

Responding to the political angle at work, Texas-based radio show host Jesse Kelly suggested in a Twitter post that the Biden administration knows people will be harmed, and even die, and they don’t care.

“People, of course they’re cutting off lifesaving supplies to Florida. These people banned Hydroxychloroquine so they could win an election,” he wrote. “Your elected leaders are not only ok with you dying, often times it’s their preferred outcome. Don’t think our tyrants are different.”