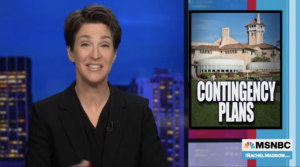 MSNBC re-signed Rachel Maddow through the 2024 election for $30 million per year. Though MSNBC locked up its biggest star, Maddow has the option to terminate her nightly TV show in April 2022, which industry experts predict she will exercise before she launches a weekly program on the network.

Maddow’s impending departure from the daily lineup leaves MSNBC desperate for a succession plan. As I documented during her contract negotiations, Maddow is singular. Viewers tune in when Maddow comes on, then leave when she signs off. MSNBC doesn’t have a successor to Maddow because there isn’t one. Not at MSNBC or competing liberal outlets. Therefore, MSNBC is likely to overlook its doubts and settle for an in-house host to replace Maddow.

I previously named Nicolle Wallace, Joy Reid, and Tiffany Cross as candidates whom MSNBC could consider. And according to Dylan Byers, Wallace has emerged as the preferred successor among NBC leadership.

“Nicolle is the most obvious in-house candidate,” an NBC executive said.

Wallace checks off the boxes for which MSNBC is looking: she’s outspoken, hates Donald Trump (a Never Trump ex-Republican), controversial, a talented host, and a woman. The last note is a factor, no doubt. Mainstream news outlets have crushed CNN for years because it’s the only Big 3 cable news network not to have a woman in primetime (8 to 11 pm ET). MSNBC will not join that group and put a male host between Chris Hayes and Lawrence O’Donnell. I promise you that.

So if it’s not Wallace, MSNBC would most likely look at Joy Reid, who is also angling for Maddow’s spot. While that move wouldn’t stun anyone given MSNBC’s track record, elevating Reid to 9 pm would be disastrous. In addition to her homophobic and anti-Semitic comments, racist commentary, misunderstanding of the government, and baseless claims that tied Ron DeSantis to a sex trafficking ring — Joy Reid doesn’t draw viewers to a TV. Just look at Reid’s viewership at 7 pm — she’s a dud.

Thus, MSNBC’s thin bench leaves Nicolle Wallace as the clear-cut favorite. In QB terms, MSNBC has to replace its Tom Brady. So they are just hoping they can find someone better than Cam Newton or Jarrett Stidham. Nicolle Wallace is at least a viable starter.

The post NBC Execs View One In-House Host as the Frontrunner to Replace Rachel Maddow appeared first on OutKick.