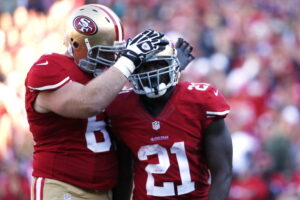 Having lost five running backs to injury, with luck to rival the Baltimore Ravens, the San Francisco 49ers are running thin on options and may bring back fan-favorite Frank Gore to be a needed fill-in.

Talking with reporters following Wednesday’s practice, head coach Kyle Shanahan was asked about signing on the free agent Gore — the franchise leader in rushing yards, still physically and mentally apt at the age of 38.

“We never fully ruled that out,” admitted the head coach. “I don’t know exactly where he’s at right now. We have a number of people here that have a relationship with him . . .If that time ever comes and we need to do that and he wants to do it, we’d never rule that out.”

Gore was last seen on the field playing in East Rutherford for the New York Jets during the 2020-21 season. In 15 games under Adam Gase’s final campaign in New York, Gore rushed for 653 yards and two touchdowns. The bruising back is third all-time in carries by an NFL running back with 3,735 and rushing yards (16,000). Of those yards, 11,703 were with the 49ers, a franchise record.

As reported by OutKick‘s Anthony Farris, Gore is open to returning to the NFL but will need to put him ambitions as a potential boxer aside, first.

“I’ve been training for both, football and boxing,” said Gore, leaving his options wide open in case a potential return to the League is no longer feasible. “I’ve always loved boxing, so that’s what I’ve been doing. And we’re trying to make a fight happen. If we do that, you’ll see me in the ring.”

A temporary remedy for their running back problems, the 49ers brought on running back Jacques Patrick from the Cincinnati Bengals, and added veteran Chris Thompson to the practice squad. Thompson spent seven years playing for Washington, operating as the primary pass-catching back in previous committees.