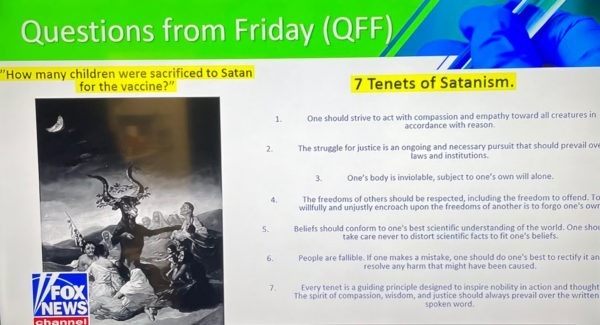 Fox News host Tucker Carlson revealed that the US military has been forcing US soldiers to study Satan and the “7 tenets of Satanism” through a PowerPoint presentation using false information in an attempt to justify the COVID-19 vaccine during a segment on Tucker Carlson Tonight.

While US soldiers are being forced to take the COVID-19 vaccine, the US military is also forcing them to study the “7 tenets of Satanism” through a PowerPoint presentation that contains misleading claims about coronavirus vaccine safety and effectiveness, Fox News host Tucker Carlson revealed on Monday during a segment on Tucker Carlson Tonight.

“The point of mandatory vaccination is to identify the sincere Christians in the [military] ranks, the free thinkers, the men with high testosterone levels, and anyone else who does not love Joe Biden, and make them leave immediately,” said Carlson. “It’s a takeover of the US military. Here’s how they’re doing it.”

Tucker Carlson reveals a powerpoint from the U.S. Army justifying vaccine mandates with a slide that says “How many children were sacrificed to Satan for the vaccine?” along with listing the 7 tenets of Satanism pic.twitter.com/a6SmmNwLvS

“This show has just obtained a PowerPoint that the army is using to justify mandatory vaccines to the troops. This is an actual slide from it on your screen. You will notice there the sympathetic portrayal of Satanism,” Carlson said. “‘How many children were sacrificed to Satan because of the vaccine?’ the slide reads, apparently sarcastically. Then the presentation proceeds to list  the so-called ‘Tenets of Satanism,’ which are taken straight from the Temple of Satanism website.”

“So here you have the United States Army doing PR for Satanism,” said Carlson, adding that the slides also contain lies about the COVID-19 vaccine. “It falsely claims that only 3 people have died from taking the COVID vaccine. Reports taken from the Biden administration itself indicate that number is actually in the thousands.”

“So we called the Army about this today, and they conceded that the PowerPoint you saw is absolutely real. Troops saw it, but it was somehow not approved by Army leadership. They did not explain how that works or what they are going to do about it,” Carlson said.