TRUMP PEACE: Bahrain Jews Worship In Public For 1st Time in Over 70 Years Thanks to Trump’s Abraham Accords 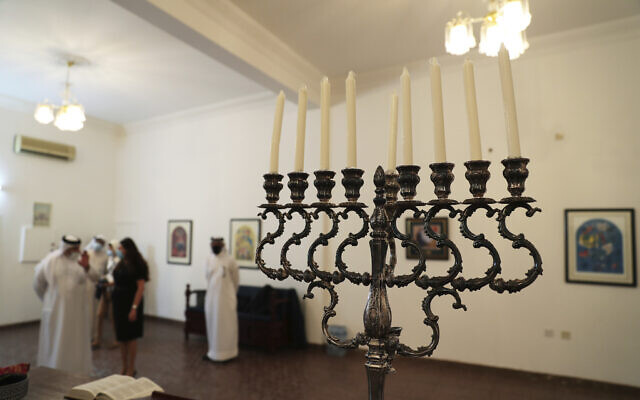 President Trump performed miracles in the Middle East. No other human being alive could have made the Abraham Accords possible. Trump was a POTUS for the ages.

By TOI, September 10, 2021
MANAMA (AFP) — For the first time in decades, Ebrahim Nonoo is leading prayer services in Manama’s renovated synagogue, bringing Jewish traditions into plain view after decades of worship in private.

Bahrain’s tiny Jewish community, about 50 people, have practiced their faith behind closed doors since 1947, when the Gulf country’s only synagogue was destroyed in disturbances at the start of the Arab-Israeli conflict.

But when Bahrain normalized ties with Israel one year ago as part of US-brokered agreements with Arab countries known as the Abraham Accords, it “opened everything” up, Nonoo said.

The small, white-painted synagogue with wood-framed windows is in the heart of the capital Manama. It was recently renovated at a cost of 60,000 Bahraini dinars ($159,000).

Inside are wooden benches with navy blue cushions, a big screen to broadcast prayers, and a wooden podium, or bimah, holding religious books in Arabic, English and Hebrew.

In this Oct. 18, 2020 file photo, a menorah used during the Jewish holiday of Hanukkah, is seen during a visit by an Israeli delegation to the Jewish Community Synagogue of Bahrain, in Manama, Bahrain (Ronen Zvulun/Pool Photo via AP)

“We can develop Jewish life in Bahrain because we have a fully functioning synagogue,” Nonoo said.

“We have the ability to bring the Jews to the synagogue, and we want them to come on a regular basis.”

On September 15, 2020, Bahrain and the United Arab Emirates broke with accepted Arab policy that there should be no ties with Israel until it makes peace with the Palestinians, and Sudan and Morocco followed suit.

The move was condemned as a “betrayal” by Palestinian critics, but it was a boon for Bahrain’s Jews.

Last month, they held their first Shabbat services at the synagogue in 74 years, accompanied by expatriate Jews and diplomats.