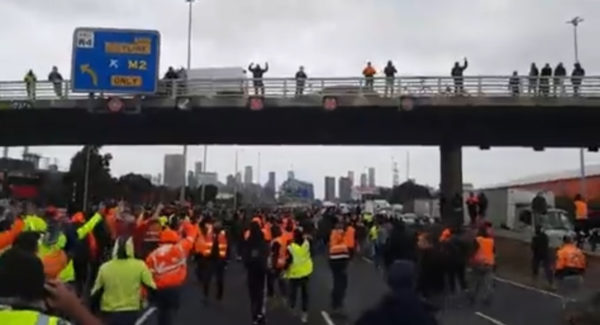 The Australian citizenry has taken to the streets of Melbourne in a massive revolt against COVID-19 tyranny, signifying the death rattle of the globalist agenda as the world watches an oppressed populace fight to regain their freedom in the Land Down Under.

A remarkable situation is currently unfolding in Melbourne, Australia, where thousands upon thousands of anti-COVID tyranny protestors have taken to the streets in a grand revolt against the government. Videos surfacing online reveal major clashes between citizens and mask-wearing riot gear-clad law enforcement officers, who are struggling to curb the restless crowd seeking to restore the freedoms they once had prior to the ruthless enforcement one of the most totalitarian COVID-19 pandemic responses the world has ever seen.

The protests come shortly after the government moved to shut down the construction industry for two weeks due to opposition to vaccination mandates. (READ MORE: Australian Government To Seize 24,000 Children, Vaccinate Them Without Parents Present In Massive Stadium)

Australia is rising up. This is what happens when you enforce medical apartheid on peoples lives and take away there freedom. They sing “Every day” and they will protest Every day.#Everyday #NoVaccineMandates #NoVaccinePassport pic.twitter.com/Q3DL0mDxAY

The Australian government has been the subject of widespread criticism and condemnation due to the policies instituted in the name of combating the coronavirus, of which have decimated the civil liberties of citizens across the country. (READ MORE: AUSTRALIA: Victorian Premier Says Lockdowns Are Not Enough, ‘We’re Going To Lock Out People Who Are Not Vaccinated’)

Dan Andrews, the premier for the Australian state of Victoria, drew ire when he recently stated that the country will move past simply keeping people “locked down” and start making sure that people who have not taken a COVID vaccine are “locked out” of normal life, reported National File.

Anti-Covid vaccine mandate protesters rioted & attacked police in locked-down Melbourne, Australia. The state government for Victoria has mandated all construction workers be vaccinated by the end of this week & have shut down construction sites. pic.twitter.com/bRbWk55WWt

Your regular reminder that there is no such thing as government power.

When even 3-5% of the population simply says “no”, government is hopelessly outnumbered.

This was a protest of lockdowns in Australia. Police told them to go home.

At least they’re finally standing up and resisting. pic.twitter.com/ayHEpOPNKB

Meanwhile, lawyers in Australia are gearing up to take the legal fight to the Supreme Court against forced vaccinations, and are gaining ground as the process unfolds. In the meantime, the government faces the test of time as the world watches in suspense, wondering what steps the government will take next. Should the Australian people’s efforts bear fruit, it would certainly deal a major blow to the globalist agenda, as various western governments have echoed the the policies of Australia under the guise of fighting COVID-19. (READ MORE: VIDEO: Australian Broadcasting Corporation Airs Weird Satanic Scene During Botched Broadcast)

STAND YOUR GROUND
STAND FOR YOUR RIGHTS & LIBERTY pic.twitter.com/S0MAvbADv3