Luke Fickell Has Elevated Cincinnati to the Big 12, But Will He Be Around For it? 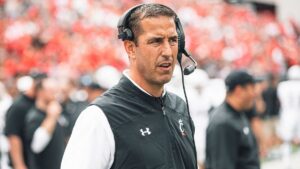 Cincinnati head coach Luke Fickell has cemented himself as one of the best in the country. Don’t believe me? Just look at Fickell’s resume.

Fickell arrived in 2017 and took over a program that declined under Tommy Tuberville, going 4-8 in 2016. After going 4-8 during his first season, Fickell had the Bearcats as an 11-win program in 2018 and 2019. Last season was the crown jewel for Fickell as the Bearcats went 9-1, beating conference foe UCF and losing to Georgia in the Peach Bowl 24-21.

Under his tuteledge, quarterback Desmond Ridder has ascended from unknown to potential first rounder in the span of his college career. All that as the 45th highest paid coach in the FBS. Not too shabby for the 48-year-old former Ohio State coordinator.

Cincinnati has unquestionably been one of the best programs in the FBS since Fickell’s arrival, which contributed to the news that became official last Friday. Cincinnati, along with UCF, Houston and BYU were announced as the newest members to the Big 12 conference. A huge accomplishment for a team that plays second fiddle to the Buckeyes in the state of Ohio. All under Fickell’s watch.

So much so, that success is now expected from the fanbase. We saw this during Cicinnati’s 42-7 rout of Murray State two weeks ago. Tied 7-7 at the half, the crowd began to boo loudly as the Bearcats went back into the locker room. It was the first bit of “adversity” they had to face this season as Fickell said after the game.

“We walked off [at halftime], and the adversity was in the 7-7 at the half, and for the first time we heard a little bit of boos,” Fickell said. “And some people would say, ‘That’s awful.’ I would say, ‘That’s good,’ because they have an expectation.”

Expectation they do, which is why they were the heavy favorite against Indiana on Saturday. And when things weren’t going well in the first half, nobody was suprised when Fickell’s team turned the switch on and throttled the Hoosiers in the second half en route to a 38-24 victory. Because that’s what the Bearcats have done under Fickell.

With USC firing Clay Helton last week, many names have been floated around to be the next head coach. CBS Sports CFB reporter Dennis Dodd even went as far to say that the USC job was “Fickell’s to turn down”.

Fickell has continued to deny any contact with the Trojans, but it will be interesting to see how the rumors heat up when the season winds down. Fickell’s team will certainly be in the AAC Championship running and perhaps, this is the year an undefeated Group of Five team gets into the CFB Playoff. If Cincinnati does, expect USC to come calling and for Fickell to consider bolting and recieving a hefty pay raise.

Fickell could choose to stay however, as the Big 12 proponent means that Cincinnati will be a Power Five team by at least 2023. How much stock does that hold with Oklahoma and Texas set to leave for the SEC? That remains to be seen but Fickell has put himself in a position to take any job that becomes available.

The post Luke Fickell Has Elevated Cincinnati to the Big 12, But Will He Be Around For it? appeared first on OutKick.

Click this link for the original source of this article.
Author: Nick Geddes