Fearful Of Offending Anyone, Disney Is Making Jessica Rabbit Cover Up 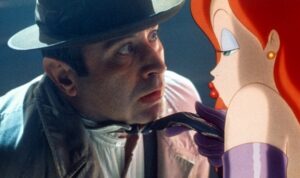 Jessica Rabbit is too much of a skank for an America that has made the Kardashians and Instagram models popular for being … well, a bit promiscuous.

But that’s the latest from Disney, which is giving the tantalizing toon a theme-park ride makeover. Needless to say, it hasn’t been well received by fans of the 1988 cartoon comedy, Who Framed Roger Rabbit and its sultry co-star.

“While the va-va-voom cartoon version will remain intact in the feature film directed by Robert Zemeckis, the Jessica Rabbit featured in Disneyland’s Roger Rabbit’s Car Toon Spin ride will be redesigned to be more empowered and far less scantily clad,” wrote Kevin Polowy of Yahoo Entertainment. “Fans are — stop us if you’ve heard this one before — both applauding and ridiculing the move.”

The Rabbit ride first opened in Mickey’s Toontown at Disneyland in Anaheim, Calif. in 1994. During the ride, Jessica Rabbit can be seen tied up in the trunk of a vehicle.

This is the type of scene that isn’t entirely uncommon in movies today. But this is apparently a little too, uh, sultry for Disney.

So the scene featuring the red-headed Rabbit, originally voiced by actress Kathleen Turner, has been removed and replaced by barrels of acid.

“This is an outrage, the worst Disney decision since they closed Mr Toad’s Wild Ride in Disney World in 1998,” proclaims one user on the Mouse House fan website, as originally quoted by Britain’s The Times. “But maybe I take these things seriously, unlike managers at Disney.”

This is nothing new for Disney, which suddenly is being blasted for being overly sensitive and taking its creations too seriously.

“Last summer, Disney’s theme parks vowed to ‘completely re-imagine’ its popular Splash Mountain attraction, replacing the ride’s influences from the controversial 1946 film Song of the South and rebooting it as a nod to the 2009 animated favorite The Princess and the Frog featuring Disney’s first Black princess,” Polowy wrote. “And Disney has tinkered with the animatronic antagonists in the iconic Pirates of the Caribbean ride for decades, including changing depictions of women being chased by pirates in 1996 and then in 2017 removing a scene featuring a woman being auctioned.”

The post Fearful Of Offending Anyone, Disney Is Making Jessica Rabbit Cover Up appeared first on OutKick.

Click this link for the original source of this article.
Author: Sam Amico

In other news...
Study Exposes Those Benefiting Most From Plandemic Fraud, Big Finance, Big Tech and Big P...
Regulators Expected to OK Pfizer Boosters for Older Americans This Week
French Company Carmat Announces First Implant of Its Artificial Heart in a Woman
New Report Reveals Who Is Running The White House, ‘He Trusts My Intuition As A…
Democrats: Architects of the Destruction of America, Part 3
Doctor brags of breaking new law, gets serious surprise for his medical license
0 Comments
Inline Feedbacks
View all comments