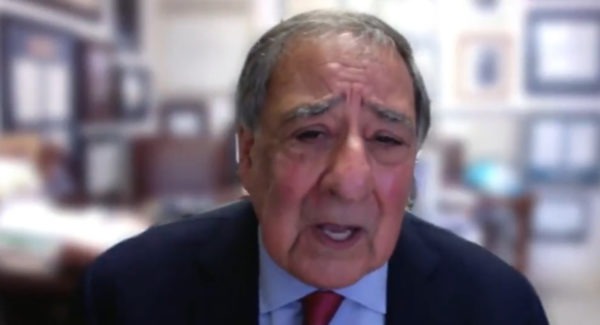 Former Obama-Biden administration Defense Secretary and CIA Director Leon Panetta appeared to admit that he was involved with General Mark Milley’s secret calls to the Chinese Communist military behind President Donald Trump’s back.

Leon Panetta, the former Director of the Central Intelligence Agency (CIA) and former Defense Secretary under the Obama-Biden administration appeared to admit that he was involved with General Mark Milley’s secret calls to the CCP military behind the back of President Donald Trump.

In an apparent admission to being involved with the secret CCP calls, Panetta, a private citizen, said “we were concerned about what the President might do.”

Former Secretary of Defense Leon Panetta on Gen. Milley’s call: “President [Trump] was appointing political people to key positions at the Defense Department. […] We were concerned about what the President might do.” pic.twitter.com/909TrnFnYU

Panetta’s ousting of former Defense Secretary Mark Esper confirms earlier reports by National File concerning the scope of how many people in the Trump administration knew of the secret CCP calls behind President Trump’s back.

Former Trump Administration Secretary of Defense Christopher Miller has come out and said that he “did not and would not ever authorize” General Mark Milley’s calls with the CCP. However, Fox News was told that he and Defense Secretary Mark Esper had “full knowledge” of the secret calls, including “about 15” other people.

However, Panetta’s apparent admission to being involved with the secret calls raises questions concerning exactly how many former government officials – then private citizens at the time, were involved in the situation that many have referred to as “treason” against the United States.

Quite something to see Panetta talk of his “concern” like it means something.

He’s a civilian, no longer serves in government yet is privy to secret phone calls to China made by the top US military leader happening behind President Trump’s back.

Just another day in

While Milley maintains that his secret calls to the Chinese military, in which he pledged to provide aid and comfort to the CCP in the event of a potential US military attack, were “perfectly” in line with his duties, House Republicans have sent a letter to Defense Secretary Lloyd Austin demanding that Milley be subject to an AR 15-6 investigation for his “outright treason.” (READ MORE: BREAKING: House Republicans Request AR 15-6 Investigation Into Gen. Mark Milley Over Secret CCP Calls)

In other news...
Woman arrested for threatening prosecutors after husband and brother arrested for drug tr...
Bait And Switch, The Bridge To Nowhere, And The Soft Underbelly Of Future Promise
Gerrit Cole Booed Off The Mound As The Yankees’ Hopes For The Playoffs Dwindle
Havana Syndrome, Directed Energy Weapons, and the New Cold War
No Holds Barred In School Board Battles; Conservatives Threatened With Censures
Left-Wing Extremists Vow to KILL Infrastructure Bill if $3.5 Trillion Tax and Spend Bill ...
0 Comments
Inline Feedbacks
View all comments